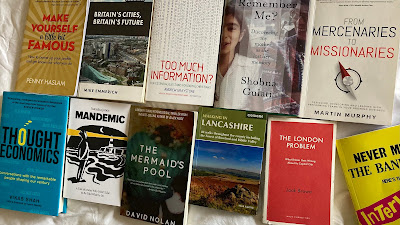 I have a couple of book projects I'm writing up at the moment. One is at proposal stage, the other is an idea. Having been through the agony and the ecstasy of the writing, pitching and publishing process before, I know what's in store. More than anything though I'm grateful for the support of friends and family.

It got me thinking about friends who have also written books recently and have therefore been on a similar trek to the peaks and valleys of getting a book out. I'm not trying to make out I'm part of some northern renaissance movement, akin to The Frankfurt School or The Bloomsbury Set, but I am very, very proud of each and every one of them for their efforts and the end result.

I've reviewed a few of them already - so you can click through to see what I liked about the books by my University friend Shobna Gulati, our neighbour David Nolan and Manchester icon Vikas Shah.

Three of the other authors I met on Freshwalks, which says something about the network that has been created. Mark Sutcliffe joined us on a West Pennine walk just before lockdown and we became good mates quickly. Slightly by design, we would speak weekly in a scheduled group chat and I was always interested in what he had to say about anything. He's written a beautiful, handy and warm guide to walks in Lancashire, and as he inscribed in the front, 'three down, 37 to go', reminding me we've made a great start together. The epithet 'warm' is the most important here because I read a lot of walking guides that are very utilitarian. Alfred Wainwright owes his popularity to his authenticity - grumpy, shy and eccentric. I'm not saying Mark is any of these, but his love of the land, and what he encourages you to experience, is quite something.

I've also had the pleasure of walking with Natasha Jones and Martin Murphy, two very different personalities, but in their own very unique ways, really inspiring and equally fascinating. Murph's book takes you through his life story as a Special Forces soldier and applies lessons to leadership in relatively safer environments. Natasha boldly takes on the challenge of addressing toxic masculinity. It's a neat, digestible and challenging guide to tackling the root causes of poor mental health amongst men.

I've written before about the completion of my MSc thesis in political science this year. Genuinely, two of the friends who inspired me on this journey were Mike Emmerich and Jack Brown. Mike's history of modern British cities is also cited in my thesis as a key source text and he makes a well-argued case for further devolution. Jack's work on London is really challenging to a lot of the orthodoxy around inequality and the power of the capital city.

Andrew Graystone and I worked together on a short-lived political project. He's such a brave and inspiring force, and I literally can't keep up with his output. The title above is a really smart guide to social media use from a Christian perspective, but he has a new book out soon that is far more expansive.

The last physical book launch I went to was for Penny Haslam's How to Make Yourself a Little Bit Famous. I was so pleased for her, for how she successfully created this massive and impressive calling card for her business. Because of the work I do around brands and events hers is probably the closest to my sweet spot of lived experience and knowledge and I can say without fear or favour that she is spot on with her advice.

The next book launch I'm going to will be for Dave Haslam's latest, a short form essay about English revolutionaries in the sixties and seventies. I'll review it when it arrives. And then there are other friends, like me, who are at different stages with their own projects.

I'm proud of all of them. They have created something special and lasting in their own very honest and personal ways and I don't hesitate in recommending each and every one of them.