Sign the petition - link Marple with Stockport by rail 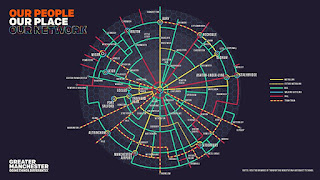 There are so many great things about living in Marple.

But let's be honest, the relationship with Stockport is an odd one. Many people don't even put Stockport on their addresses, preferring to think of it as Marple, Cheshire, and avoiding thinking too much about who the direct debit goes to once a month to pay for the bins to be collected. Then there's the local councillors who about half of us elect most years, without them ever campaigning on a vision for leadership in Stockport. That's not a criticism, by the way, but a valid observation.

To get to most places from Marple, I imagine a journey through Stockport doesn't figure much. You either go round it, or join the M60 motorway to go through it, rarely touching the centre itself. Unless that is, you actually want to go to Stockport. At peak times, this is slow. My kids get a bus to college in Stockport that is unreliable due to congestion, and frankly it is disgracefully expensive.

So it doesn't exactly help to build a civic connection when there isn't a direct train service, despite Stockport station being only 4 miles away. Building a new line wouldn't be easy or practicable, mainly because of the topography, and there was probably a good reason it hadn't been done in braver bolder times.

But now that there are ambitious plans for Stockport - greater residential concentration and a larger secondary office market in the centre - and that the commuting population of our area seems to be increasing exponentially, then it would at least be worth examining travel patterns to see what could reduce road usage and provide a better link.

Thus far, Andy Burnham, the Greater Manchester Mayor, has developed an ambitious plan for a massive expansion of routes around Greater Manchester including the possibility of a tram train to Manchester from Marple and Rose Hill, improving a spoke into Manchester. However, there is a simpler and more achievable short term solution - a train service linking our community and parts of Tameside with Stockport.

As you know, the Rose Hill services to Manchester Piccadilly pass through Hyde and Guide Bridge, passing by a branch line which runs to Denton, Reddish South and then joins the main line just north of Stockport station at Heaton Norris. An alternate service along this line to Stockport would take about half an hour, pretty much the same as the bus.

There are lessons from London's development of the orbital overground 'orange line' which upgraded poor services on under-performing routes with high frequency, better designed trains, that in turn opened up more variety of journeys and locations. I don't underestimate the hurdles that have to be overcome, but I do see the urgency of creating a rail system that better serves all parts of Greater Manchester.

Andy Burnham gets this, which is why his own transport strategy - Our People, Our Place, Our Network - took a long term and wider view on a whole host of spatial and transport issues. These include sustainable transport, different types of journeys used mixed modes and opening up the whole of the city region to new possibilities.

The Stockport to Guide Bridge line is just such a service, and it's only through sustained jostling from local campaigners and the Friends groups at local stations that the case can be made consistently.

A chap called James O'Mullane has started a petition that I hope more people will sign.

The July blog experiment - what I learnt

I've been blogging for a long time, you would have thought that I'd have understood why I do it by now. But if you don't keep testing and probing you never learn.

So, I blogged every day throughout July. Some days it was an effort. In fact on one of the days I just uploaded a holding post saying how hot and fed up I was. Life's like that, isn't it?

But I did it to see if I got people's attention, which topics got the most traction, and to make this purely a numbers game, which were the most popular posts. Once I'd done that, what steer that would give me about what works on here and what kind of blog this might be in the future.

I did two blogs about faith. Why I'm still a Catholic and what that means on a daily basis. They didn't get much traction. I think partly it was because I didn't pump them much on social media as a result of my own lack confidence in expressing and defending my own faith position. Sad I know, but in a very crowded market of good quality Catholic bloggers, I know I'm miles behind and have very little to offer.

Blogging about national politics is similar, but I get good stats. I still think it's a crowded market and I enjoy the traction and debate that I get from it, but it's not going to break through. Plus, it's a little close to what I do at work. I've also said, this blog is for the other stuff.

The one topic I nearly always get good reach with is Blackburn Rovers. Given this was July and I only actually went to two friendly matches, I knew there was a bit of a season build up that might have dampened enthusiasm and reader interest, but two of them made it into the top 10. One angsty piece of confected outrage about the away kit made it into the top 5, but all that proved to me was the harder you try to be controversial the bigger the impact.

The other high fliers were a bit random to be honest, a long awaited lament about Mark Hollis (music), a piece about Stockport town centre and a return to a previously popular theme about post-50 male fitness and goal setting.

In second spot was our account of two years of dealing with the Criminal Justice System, which was highly political, as we anonymised some of the detail, but of direct personal interest too.

But the most read by some distance, and the one that was shared widely on social media was the one about Tony Wilson quotes and Manchester's tendency towards faux nostalgia.

It tells me two things, if I may say so. 1. I care deeply about this kind of stuff and that I have a voice in this debate about our city's identity.  And 2. If I blend those two facts, and think about what's current, then I have a right to carry on.

As you were.
Posted by Michael Taylor at 1:25 pm No comments:

Fulham away is different

Fulham away is different. I sat next to a woman eating a pie with chopsticks, in a shared stand, I chatted football to Fulham “geezers” on the way in through the park, we went to a nice pub before and bought burgers in brioche buns. Call me a middle class fop, but give me this any day over angry, boorish, snarling and bullying “real fans”.

I used to live just off New Kings Road in early the 1990s, and it was a real treat to discover that it still got the best kebab shop ever, Kebab Kid. Sadly our local pub The Jolly Brewer is now flats, while our old house is being rebuilt and is probably worth £1.3m plus.

As for the match, it was a decent first half from Rovers, but a failure to punish Fulham in that period of dominance cost us. I felt that in the second half we lacked a plan. Why was Lewis Travis subbed off again?

More importantly for us, it was a great day out with pals.
Posted by Michael Taylor at 8:44 pm No comments: