A few weeks ago I went to an excellent discussion about our new political landscape, featuring two of the finest journalists working today - Jen Williams and John Harris - and some top drawer political scientists, including Rob Ford and Maria Sobolewska from the University of Manchester.

They were all brilliant on how polarised and dense our politics has become, describing the shift in social attitudes that political research around Brexit has exposed. But ever since I've been mulling over what was discussed and how it affects everything else beyond politics.

The World Cup has done something similar, forced us to reconsider our relationship with England. Not a nation state, but a football team that represents a stateless nation. As Matt Forde says in the i, it also thrust forward a team of such 'diversity, dignity and talent' that it had to stand for something to unite us. The manager even grasped for the bigger picture when we said how much pain and division blighted the country.

As a starting point, if you accept that the vote to Leave the European Union was a narrow vote against things as they were, then there must be a whole lot more going on. It seems to me to be a culture entirely defined by what you are against rather than for a programme of change. But change occurs in many different ways, shaped by human behaviour and choices. As William Hague said recently, actually when you step outside of politics the rest of the world is in colour. Viewing these profound social schisms purely through the optics of politics and voting intention is possibly the least interesting exposition of this change, especially as the political paralysis seems to satisfy no-one and even fails to address the acute policy challenge of Brexit.

Where do these changing societal attitudes, beliefs, emotions and values play out? The voting intentions have been important - seismic, epic, plate shifting - but they may not be so for a few more years.

I'm not sure I totally buy into the idea that Britain is retreating into political tribes, where people vote based on their attitudes and feelings. I genuinely don't think they think about politics that much to deserve being defined as tribal. But something is shifting. The movement from the cities and into the suburbs, making some more places a bit more like inner London, and others defiantly less so.

We're also confronted with a degree of complexity we haven't really got to grips with yet. What attitudes form towards people from other countries, be they economic migrants, refugees, or someone who can only be identified in a mundane daily encounter as 'foreign'? A sliding scale of acceptance and dislike to a range of ethnic groups ranging from Chinese (good) to Somalis (bad) troubles me. It's where the Windrush scandal ends up, it's what happens when a hostile environment is played out by bureaucrats with targets - they go for the easiest first.

What about other everyday behaviours that these attitudes and feelings may alter? How people drive, how they behave on public transport. There's something divisive and angry about cyclists that shouldn't be so joyless. What about consumer purchasing habits? Why do young people hoard so much less? Are we really buying more ethical products or cutting down on single-use plastic? Do people really wash down industrial grade skunk with Fair Trade Coffee? I'm not quite sure where attitudes towards starting a business are these days, or to family. Our household pays rather more attention than most to wider social attitudes to education, but they too are wrapped up so many other social norms.

So too do the measurement of social virtues we would consider to be good: manners, contributing time to good causes, giving to charity, driving habits, tolerance of criminal behaviour.

What consent is granted to institutions, professionals and power structures? Many people have a disconnected relationship with where they work, others are loyal, supported and motivated. And according to the latest British Social Attitudes survey - "Despite ongoing labour market change, the British public continues to perceive there to be a dignity in work, with intrinsic value placed upon employment that goes beyond simple monetary compensation." Generationally and class wise, people want different things, feel differently and have varying degrees of hope. Who doesn't want for respect, pride, value and and a shared mission in what they do with their life?

The same applies to business confidence. I’ve always been fascinated by the corporate zeitgeist. It affects credit decisions, risk appetite, whether to give someone a job or not. But despite the erosion of trust in business, helped by Philip Green, the other Philip Green, and Mike Ashley, business is proving pretty resilient and public attitudes towards business in general haven't turned.

This starts to get us into whole areas that you could make an attempt to politicise by blaming cuts to public spending - such as trust in the police, but it quickly gets into really complex areas around attitudes to vigilantism and hostility to the justice system. Read the comments on any crime story, any Facebook group about local issues and it's a cauldron. Isn't that partly what lies at the heart of why the Free Tommy Robinson nonsense has gained traction? On one hand is a pitiful misunderstanding of his breach of licence, but also a fury about the grooming gangs, the insolent defiance of the perpetrators and a perception that they've got away with it. But equally, there are many that fall below the two crucial markers of British values - "don't take the piss" and "don't be a dick".

The England performance in the World Cup, like the unifying response to the Manchester terror attacks, give us some cause for comfort. But we need to fall in love with our country again. And the more things we can agree on about what that country looks and feels like, the better chance we'll have. The prospects of politics doing that are more remote than ever. But until then, we scratch around.

Posted by Michael Taylor at 1:20 pm No comments: 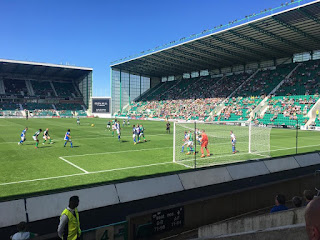 Edinburgh has so many good memories. Day trips, the Festival, and when our pal Dave Crossen lived in the city, we had weekends, New Years and I even had a week long holiday up there.

Yesterday we added another as we enjoyed a day out for the football, watching Blackburn Rovers win 2-0 at Paul Hanlon's testimonial against Hibernian at Easter Road, another new ground I'd not been to before. You can read very little into friendly matches, but Scottish football must be in a bit of a mess if that was the fourth best team in the country. It seems to me the SPL is basically Man United (Celtic), Leeds (Rangers), Forest (Aberdeen), Birmingham City (Hibs), Ipswich (Hearts) and half a dozen random teams from League One. But the city was the attraction yesterday, glorious and welcoming. Stunning to be around and it seems to be growing in self-confidence and modernising since the last time I visited. 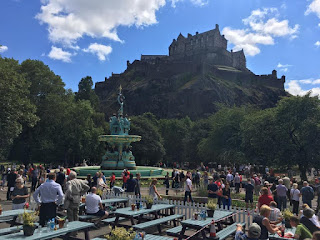 Hopefully that's something to do with the efforts of Paul Lawrence, once of this parish, who invited us along to West Princes Gardens to see a delightful new fountain.

It was a great trip up and a rubbish journey home as we had cancellations and delays which stretched the day out. But you can't fault a day with the people you love, deep fried Mars bars, City Cafe, Leith Walk and the Royal Mile.
Posted by Marpleleaf at 10:18 am No comments: