Back in the pod - Cottonmouth Manchester 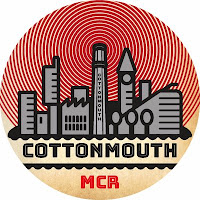 We recorded the first edition of the new format Cottonmouth Manchester podcast this month. I was chuffed to have been asked by Vaughan Allen, CEO of CityCo, and the pod host, to be one of two regular guests commenting on the news, Manchester culture, business and politics. I was doubly chuffed that alongside me would be Eve Holt, Chorlton councillor and social activist, and someone I've enjoyed working with over recent months.

The first one was pretty good, I think. I listen back and always judge it harshly, and know it could be even better. But now we know what's expected and what we're both like on the mic, then I think it's going to be great fun.

Posted by Michael Taylor at 4:06 pm No comments:

Deutschland 86 - the divided and the deplorable 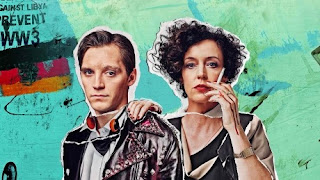 We’ve just finished ten episodes of the excellent Deutschland 86, the follow up to 2016’s Cold War caper, Deutschland 83. Our hero Martin Rauch starts the series in exile in Angola, teaching German to kids, many of whom are displaced by a proxy war fought by Africans representing manipulative communist and western interests, until he is cornered back into action by his deplorable Aunt Lenora.

There are three great facets to the whole package; the acting, the script and the overall design. Because of the language (it’s in German), and the subtitles, I think I study the faces more and the expressions, the upper body leakage. The writing and story structure expertly manages to weave in real events from 1986; Chernobyl, AIDS, the Berlin nightclub bombing and the US retaliation in the bombing of Libya. But it also catches the style of the era very effectively with Mad Men style graphic titles, a sharp eye for punk fashions, especially in West Berlin, as well as big shoulder pads; all of which is complemented by snappy soundtrack, bookended each episode by the English version of Major Tom by Peter Schilling. Poignantly, just a few days after Mark Hollis died, up popped Talk Talk’s Such a Shame for the pivotal scene of one of the early African adventures.

This tale is darker, I’d say, than three years previous, where it bordered on Carry on Communism at times. The government of the DDR is even crueller and more corrupt than before. There’s certainly no playing it for laughs in how the Stasi treat the Fischer family.

Cynicism abounds and no-one really tells the truth about what they really want and what their purpose is. Everyone’s a bit of a shit, and a bit of dupe at the same time. The ending seems at once both hopeless and desperately sad, the ever presence of a wall that divides families, a people, a country. The hope however is in how their lives play out in Deutschland 89.


Posted by Michael Taylor at 11:06 am No comments:

February in Berlin - no blog, no cry 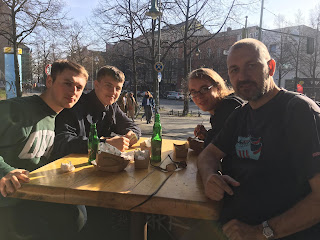 February went by in a bit of a blur. So much so I didn't update this blog much. I've been a bit poorly, but nothing serious, I've moved offices at work and started a different role which I'm still getting my head around. I'm also moving into the writing phase on my MA and feel I'm wasting time if it's not about that. But there's something more. As I said on a Twitter thread today, I forever find myself stuck in a perpetual state of repetition. Whatever new outrage emerges about Brexit, Labour, the Catholic Church, Blackburn Rovers, Manchester or Marple, I feel I've said it all, or that all the things I care about seem to be combusting at once.

I said in April 2018 that Labour can't get rid of anti-semitism, because Jeremy Corbyn doesn't understand the problem, or see it.

I said in September 2016 that I didn't fear a Labour split, but I actively want it to happen. That the party is wrong, nasty and lost to the far left. Same rules apply.

This month a group of Labour MPs did what I've been hoping they'd do and left the Labour Party. This is what I said in 2017 about a project of the centre, and it pretty much stands.

And as for Blackburn Rovers - the underbelly has been exposed, which I was worried about in October, only now we can't seem to beat teams as ropey as Rotherham or Reading. More Travis, more Rothwell and a fit Lenihan should stop that rot.

Part of me is tempted to do what David Parkin does and knock out a reflective summary of the week on Friday.

Anyway, one thing I did do in February was visit Berlin with Joe, Matt and Elliot. It was a great trip, a real living city. It had a vibe of London - but as if it was South Kensington, Westminster, The Mall, Hyde Park and six better versions of Shoreditch. We probably only scratched the surface as you'd expect in a two night break, but we did have the best burgers at a place called Burgermeister in Kruizberg and immersed ourselves in recent political history.

By a remarkable coincidence the new series of Deutschland 86 starts on Friday. Maybe that will get me writing about good telly again.
Posted by Marpleleaf at 8:25 pm No comments: