Sometimes the other team is just better - Sheffield United were 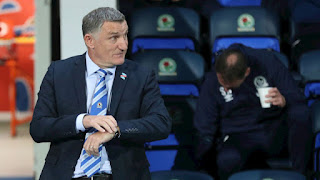 Moving up a division is a tough task. Even from the first home game of the season Blackburn Rovers were up against a far better goalkeeper from Millwall who proved to be the difference. On the back of this home defeat I don't question the abilities or the credentials of the squad, or the manager. I'm happy to take a long view on this.

But here are my nagging doubts.

Character. 2-0 up with ten minutes to go, Sheffield United saw out the game without any sense of panic, nor did they at any point in the match have to adapt their style of play. This is something Mowbray hasn't forged into the character of this team.

The signings. I'm still not sure what kind of player Bell is. He doesn't have a firm defensive presence, he doesn't tackle and though he has the ability, he isn't brave enough going forward. The bloke behind me tells me he used to roast opposition defenders when he was at Fleetwood (Bell, that is, the chap behind is in his 70s). I think Mowbray wants to play him wide in a 3-5-2, but at the moment he's a square peg in a round hole.

Our liveliest game changers aren't getting game time - I like Joe Rothwell and think he can be a big impact player, but he has to have time. Same with Palmer. Brereton? Not seen enough to convince me yet that he's worth the outlay.

Lewis Travis. Everything I've seen of Travis I've enjoyed - except for the sending off at Portsmouth. I hear they tried to loan him out. Personally, I think he could be a very special player for us and hope his run in the side comes soon.

I thought September looked really, really tough and six points was good work. October is going to be tougher still. But here's the thing, I think Mowbray knows all of this. He's worked wonders before and he's looking ahead.
Posted by Marpleleaf at 8:30 am