Visit Auschwitz, it's hard, but necessary 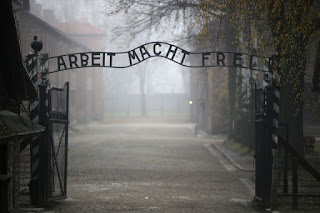 It's been almost a year since Rachel and I took our youngest son to Krakow in Poland for a city break. Absolutely central to the trip was to visit Auschwitz and Oskar Schindler's factory in Krakow. I haven't been able to find the words to express what we experienced, but not a day has gone by that I haven't been haunted by what I saw, what we all felt and why it's important.

Part of the reason for the blockage is that there are far more eloquent witnesses than I. There are books, documentaries and witness accounts. Anything I can say also sits badly with the rest of what I warble about on this blog. Anything I could possibly express about a place of such bleak barbarity and profound evil will just look awfully crass and unfeeling. I'm sorry for that. We didn't take photographs. We took only our memories and what we were told by a tour guide who managed to describe everything in an incredibly descriptive, powerful and mesmerising way.  But I can't skip it any longer.

On a fairly regular basis friends and colleagues pop up who are planning a trip to Krakow. And to each one, I look them firmly in the eye and say that they absolutely must visit Auschwitz. It is one of the most important things you can do today but it forces you to remember and it forces you to reflect on what happens to people because we let it happen.

This week we have had Holocaust Memorial Day, the day that marks the liberation of the death camp from the Nazis. On this day, many of us remember; we share social media links, sign memorial books and light candles. Others still feel it necessary to question why we need to, question why we should and, outrageously, deny that there is even a need for us to do so. One of the reasons I have found it so hard to write anything about the experience is the sickening prevalence of Holocaust deniers. I followed the earlier trials of these attention-seeking truth twisters with horror. Their insidious motives drip feeding insult upon the injury and industrial scale cruelty of what happened.

I also despair at the hasty "yeah" and the insolent "but" that prefaces a breathtaking rant that lacks both awareness and shame. I lament the numbers game that history forces us to play, but at Auschwitz it's simply too overwhelming to contemplate engaging with anyone who offers a desultory "what about?".

I'll be honest, my primary senses weren't assaulted by either the stench of death or the intense humming of evil. What you see, what you hear and what you feel are far more overwhelming. The first horror is the piles of spectacles, suitcases and shoes in the brick built barracks behind the barbed wire and the notorious Arbeit Mach Frei gates. These mountains of artefacts betray the treachery and deceit that many of the victims were lured to. Then there's the sheer mechanised bureaucracy that sustained the vast camp itself.

On its own the death camp is hard enough to take in. But the context and the brutality of the Nazi occupation of Poland confronts you profoundly in the tour of the Jewish ghetto in Krakow and Oskar Schindler's factory. A people erased from life, eradicated like vermin, reduced to being the "other".

We won't forget that this happened, we can't. The greater danger is that we forget how. That we stop believing in love and give in to hate.

Posted by Michael Taylor at 8:53 pm No comments:

Leading through change - half a dozen thoughts

I think a lot about change and how leaders can successfully manage change in organisations in a stressed situation. One of the (many) bonuses of working alongside the leadership team at Manchester Metropolitan University is the insights we often hear from leaders from outside the Higher Education sector.

I can't say who it was, but we had a real treat last week with one external visitor talking about a profound turnaround situation, but also drawing on experiences of taking an established institution in a new exciting direction earlier in their career.

Summing it all up, it's clear that management is about the efficient running of the status quo. Leadership is about change and re-orienting an organisation to a new goal. Here are six key pointers I thought worth sharing.

Posted by Marpleleaf at 1:53 pm No comments: 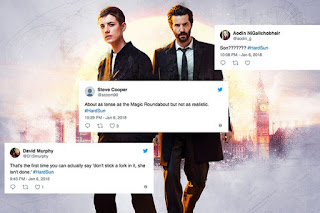 By far the best output from BBC Drama at the moment are the trailers. I was completely lured in by the promise of a pre-apocalyptic crime thriller, Hard Sun, but it has been possibly the worst drama series I've seen on the BBC for years, even worse than the remake of Survivors and right down there with last year's execrable Undercover. Badly acted, preposterously scripted, overly lingering on London landmarks and needlessly violent. In fact needless sums it all up rather well. It's Spooks meets Line of Duty with none of the cleverness of either.

Similarly McMafia looked immense in the trailer, it was even quite promising throughout the first two episodes, but has sadly descended into something of a predictable rhythm as we hit the half way mark. The best things about it are its internationalism - the Russian actors, no expense spared on the global locations and the source material of Misha Glenny's factual analysis of globalised crime. The weaknesses are what they do with it all when they've got there. Comparisons have been made with last year's sizzling Le Carre adaptation The Night Manager which kept the tension high throughout with a clarity of motive and that raw sensation of lust and attraction. When you find yourself wondering which is the most dynamic female British character - choosing the compliance manager in a hedge fund, and not the ethical fund manager girlfriend - you know there's a problem somewhere.

Other TV critics have pointed out the grand scale of these projects, and the projection of international place, is both a burden and an asset (Private Eye's excellent TV Eye, notably). I find myself worrying now that Sky Atlantic's forthcoming Britannia, starring David Morrissey, will be an attempt at replicating Taboo, but in Roman Britain. Drama by numbers, it seems that if  something works once, then the formula gets used to death, to the point where the one thing that has always made BBC Drama good is no longer present; originality and the capacity to surprise.
Posted by Marpleleaf at 5:44 pm No comments: 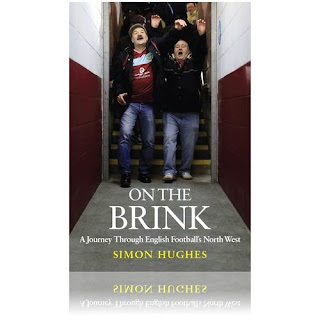 Over the course of the last five turbulent football seasons it's been at times a humbling and humiliating experience as a Blackburn Rovers supporter. True, in any sporting situation there are always winners and losers, that fortunes of clubs ebb and flow.  But for some fans the pain and disappointment is made worse by their clubs falling into the hands of criminals and greedy charlatans.

I like to think I've always been able to spare a thought for the plight of other fans and how the distribution of money is a huge missed opportunity to create something amazing and of a real common good. In the 1980s I was active in the Football Supporter's Association which was moderately successful in giving fans a voice they didn't have back then.

Simon Hughes takes us on a journey around the North West from Carlisle to Manchester and many points in between. He speaks to owners, players, managers, of clubs from the heights of the Premier League to little Droylsden and Barrow and including insights into real grass roots football (which isn't the same as the Academy system, contrary to what Sir Trevor Brooking thinks). I really appreciated the richness of each and every story, wincing at times at what people put themselves through. But I was also slightly jealous that in my own time as a business journalist, covering this exact same patch, I didn't use my access and contacts to do something similar; but grateful nevertheless that Simon has used his position at the Independent to do this.

On balance I'm pleased that the most head-spinning, disgraceful act of larceny in recent North West football history isn't included. I refer of course to the plundering of Blackburn Rovers by Jerome Anderson and Kentaro and the "ownership" of the Venky's. I say I'm pleased because it made me realise there is more to my love of football than the pre-occupations of my own team in the third division. Yes, I have every right to feel hurt and wounded, but so too do supporters of pretty much every club featured in this book. It also raises some fundamental questions of society and how we raise children to play the game. The chapter on Fletcher Moss Juniors in Manchester is particularly poignant.

I genuinely worry too about how one-eyed so much coverage of football has become. I don't have the time or the inclination to pore over the details of the opposition like I used to, I enjoy listening to Jim Bentley and John Coleman on BBC Radio Lancashire Sport, but I only really get emotionally triggered by the interview with the Rovers boss.

It can be an uncomfortable read at times, but it's ultimately optimistic, because it captures a passion so well and I'd heartily recommend this work of real dedication.

Available from DeCoubertin Books.
Posted by Michael Taylor at 4:01 pm No comments: