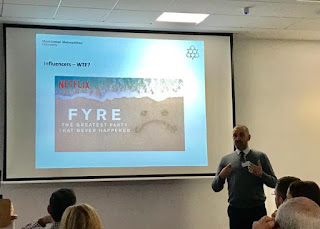 I started out in journalism as I’ve carried on – unconventional, unorthodox and unprepared. But I was always convinced that what I was doing had a valid purpose.

I was talking to my friend Paul Unger about this the other day; business reporting comes with such a responsibility to the community you are part of. It also gives you such a solid grounding in the basics. Checking, summarising, thinking strategically, listening, understanding and checking again. You have to learn how to cut through the marketing hype of slick PR operations to get the real message. Paul reflected on how Giles Barrie built a powerful brand and platform at Property Week, that in turn spawned a cohort of top drawer media professionals working today. My generation in the media and broadcast press of the 1990s have also gone on to great things too, with the benefit of that firm foundation.

My first editor in the business press was a guy called John McCrone who was pretty tough on me. He had a reputation for having buried a company up to its neck in a computer leasing scandal. He held me to a high standard and marked my work ruthlessly, pushed me to ask the difficult questions and helped me more than I probably ever thanked him for.

You have to develop an empathy for the sector you cover, in turn you risk the inevitable accusation that you have ‘gone native’ and got too close to the people you are supposed to be covering. I’ve definitely done that. But then I just like smart people and can’t help but be impressed by them and their achievements.

In our heyday at Insider and at Television Week in the 1990s we made choices to get closer to our readers by ostracising, humiliating and hounding those who didn’t play by the rules. We were a player in that world, especially when we had a role in building up chancers and crooks as a result of our own previous naiveté.

I used to do this talk to journalism students at UCLAN about why the business press was a good route to a career. One of the attributes you’d pick up was versatility. Writing for different formats, producing events, analysing new sectors. The way things have shaped up since have multiplied that phenomena. But the one constant is knowing what to say, remain trusted by the people you need to be trusted by, and knowing when to say it.

I think of all of this as I browse through the regional media market now – Paul’s brand Place North West and the media site Prolific North are ambitious deep dives into the vertical sectors; they have events as well as streams of content.  The business news factories keep churning it out; the race to cut and paste. I get all of them daily and sometimes can’t distinguish whether I got a story from one or the other. But no media organisation can afford to ever be behind and irrelevant. As long as the print products can generate an advertising income no owner will cut off a revenue stream and take their chances on a digital market that’s been restructured to suit Google and Facebook.

A lack of relevance, a lack of reach and diminution of quality has created a greater drive towards creating your own content channels. Cut out the middleman. It’s created a situation here where our Met Magazine, produced at Manchester Metropolitan University, to a very high standard, is the method by which we get out key messages for local stakeholders.

Sure, we do plenty of media work, our press office are great at it. This week we had ITV interviewing Maisie Williams from Game of Thrones on campus, and last year David Beckham came to visit. Our experts, despite what Michael Gove said, are still in demand and trusted. We also actively work with other regional players to make our contribution effective.

When I was asked to do a talk at Alliance MBS today on media and messaging, especially the impact of social media, part of me thought it would be a masterclass. A modern PR toolkit for engagement with press and media, star columnists, and influencers. Such is the level of my cynicism now, it would simply include:
And that, in many ways, highlights the problem. 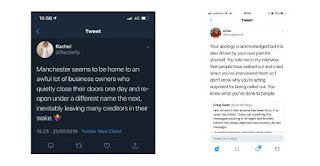 Two tweets in the last week also showed to painful effect what is going on under the noses of the media that they are able to react to at best, but have actively encouraged at worst. Rachel Thompson from Manchester Digital admirably called out the companies around the city going into administration then opening up around the corner as if nothing happened, leaving creditors high and dry. The other was a tweet calling out a horrendous experience at an interview. But the explosion of interest in the issue here proved it goes way beyond the odd isolated incident. The media, business clubs, events organisers and social media have all been culpable in creating many of the characters responsible; not least promoting the cult of the individual, especially the alpha male, the all powerful corporate dictator, who has taken all the wrong lessons from Steve Jobs.

It comes back to another painful truth about entry into the media profession, as well as resources. So many new emerging journalists want the glory, the status, the attention. I know this. I enjoyed it all too. They want to be a face, a name. Helen Lewis of the New Statesman was commenting recently that graduates want to be columnists, like Owen Jones or Katie Hopkins, neither of whom I rate, by the way. But to have that right, it isn’t good enough to be a voice, loud, strident, opinionated, you have to be able to do the journalism. I’ve been interviewed by Jones and he was dreadful. He was a good speaker at a left wing rally, but he’s no researcher and certainly no kind of journalist.

The other modern new phenomena that I just don't get are so-called 'influencers'. I sat through a presentation recently on how they came about, who they were and how much money they make. I was staggered. We had a descriptor for them back in the day – the corrupt ones. Paying for a positive review is just bullshit frankly. And if you want to see where it ends up – watch the Fyre documentary on Netflix. A party organised by the worst people in the world for people who actually want to be like them.

I keep hearing that regional journalism is dead. I tell you this, Jess Middleton-Pugh and Jennifer Williams are two of the best we've ever seen. Jess has built a powerful community around property and place making. Jen covers politics and social affairs for the MEN and is the best political journalist working in Britain today. Some are better known, some have better access. But none are as feared and respected like she is by those she covers.

But they’ve both made a choice – they have the same number of hours in the day as every other journalist, they hold truth to power. And yet, let's not forget, there are so many resources that journalists have available now that weren’t around when I started out.

The internet, for a start. Freedom of Information requests. The justice system can be just as impenetrable, but the Companies House website enables you to rely on more than your gut. Open source journalism and data scraping has been the driver behind Bellingcat; a new model of political gossip has created Guido Fawkes, poisonous as it sometimes is. Locally, a few have tried things, but they’re at the margins.

I’m heartened by the CIJ, the Centre for Investigative Journalism at Goldsmiths in London and by a young journalist called Jem Collins who has created Journo Sources. These tools, this spirit for collaboration makes me a little less worried about the future.

And the other incredible resource is access. Social media has flattened the hierarchies, it has created new ones, granted, but it has made the powerful more visible and more fallible. They can’t hide, they don’t hide. More people have that platform and frankly they are easier to track down and enter into dialogue.

My hunch is that we’ve created a vacuum here. A post-truth fake news cavern that is being filled up with a mixture of ice and shit. One melting, to be forgotten, and the other growing and creating a stink that threatens to choke us all.

That painfully needy streak I’ve always had manifested itself in me being flattered and impressed by attention. But how many of you genuinely have a regular dialogue with a journalist? Good journalists talk to people, they get stuff explained to them, tell their stories, share, explain, effectively get the experts to do a lot of the legwork. Same rules apply now. Don't look to the editor, be the editor, come together, share, support, and source. It’s a community endeavour. If we as a community created these monsters like your dodgy company flippers, like the idiot bullying business owner, then we have it within ourselves to do something about this.

I don’t know what the answers are. I can’t claim to know where this will go. But I can say with some certainty that if we don’t pull our fingers out and think very seriously about what we are doing, then we’ll have no-one left to cry to.
Posted by Marpleleaf at 11:58 am No comments: