Isolation telly - some from me to you - recommendations welcome 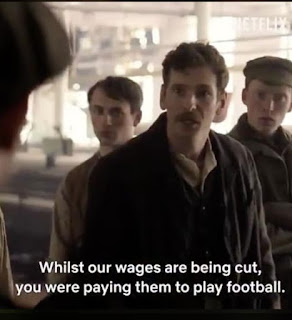 As we enter the third week of isolation, it seemed like a moment to sum up where we are with various bits of telly drama and films since I last did a review of telly in June last year.

The Crown (Netflix) - it took us a while but we're up to date with the sprawling dramatised peep into the lives of the Windsors. I liked the earlier ones with Claire Foy as Her Maj, but season three picked up with her warm relationship with Harold Wilson, brilliantly played by Jason Watkins.

The English Game (Netflix) - there were even more liberties with the historical truth in this period drama that felt a bit like Downton Abbey meets Escape to Victory. My eldest son Joe is in it as a supporting actor, (pictured, to the left) so I was bound to be a bit excited. The footballing history was a bit warped, which was a shame, blurring two Blackburn teams. But it was well made, with a good historical storyline that though it wasn't always real, it had a wider evidential truth to it about the era. There's a long piece to be done on Fergus Suter and Blackburn Olympic.

The Capture (BBC) - seems a while ago now, but this BBC dystopian drama set in London where a young soldier is fitted up for a crime was pretty gripping, even if its moral twists and turns were really annoying.

The Walking Dead (Fox) - I'm the last one standing in our family when it comes to this zombie apocalypse now in its TENTH season. Some of the recent episodes have been really good, plenty of tension and some unexpected deaths that seem to have had the effect of moving it all on from its dark days of season 8, when I actively wished its demise. The plotlines have sometimes followed the comic book arc too closely, but the rhythm has really picked up now. Disappointed I haven't managed to catch up with Fear The Walking Dead season 5, or even to locate where it is.

The Stranger (Netflix) - loved this locally shot thriller. Kept you guessing all the way through, with judicious use of plot manipulation. Loved the chase scene that went from Stockport Market, through Manchester city centre and ended up at the railways sidings in Bury. Impressive.

Homeland (Channel 4) - best season since the first. Half way through and Carrie is at her unpredictable and brilliant best.

Succession (Sky Atlantic) - Gutted we came to this late. The script is one of the sharpest, sweariest most cutting I've seen in a while. The acting so on point. We're now puzzled as to where we can see the second season.

COBRA (Sky One) - a bit of nonsense really, but slightly prescient as turned out. Scratched the itch that the absence of Spooks has caused, and liked Robert Carlyle very much.

Keeping Faith (BBC) - didn't like the second series as much as the first and wasn't sold on the idea of a new actor to play the arch baddie Gael Reardon. Good to see the return of Faith's yellow parka far more than her drippy husband.

Better Call Saul (Netflix) - me and Matt are really enjoying Season 5 of the Breaking Bad prequel, which has started gently segueing into the universe of Walter and Jesse. The levels of deception cut right across the storylines and the quality of the acting is never less than terrific.

Ozark (Netflix) - I'm one episode in to the third season which dropped at the weekend, as they say.

Looking forward to Save Me Too with Lennie James and Suranne Jones on Sky One. The first season was a couple of years ago and was probably the highlight when I did this round up in 2018. The two minute trailer had me panting.
Posted by Michael Taylor at 10:06 pm No comments:

Now all them things that seemed so important ...

Well, mister, they vanished right into the air

Day two of the great lockdown and here we are quoting Bruce Springsteen and trying to keep calm and carry on.

Last week the most pressing non-work issue on my mind was what new hiking boots to get in time to break in for my trip to the beautiful English Lake District to climb Skiddaw and Catbells in April*. Other quibbles like sporting tournaments, the trains and the Labour leadership election all seem so utterly inconsequential now.

We're not sure when or if or even how one of our sons is getting back from his posting in Africa. One of our students is home and the other confined to his high rise residence. But we have technology to keep in touch with parents and friends, these are the blessings we count.

We've signed up for the local support networks, we've done that through our Church and unofficial community networks, but it's imperfect and unclear what we can safely contribute other than to stay at home and try not to fall over each other.

On that imperfection, I've also heard it said that there will be a reckoning for how organisations behave. Rachel and I both work for large complex organisations trying to keep on top of difficult communications issues, and with so many moving parts. Difficult decisions are being made, but always with the very best of intentions. Seeing the government wrestle with this, and then how businesses react, show's painfully that not everyone will get this right all of the time. Yes, the Wetherspoons bloke, Ian Lavery, Mike Ashley and Britannia Hotels appear to have acted with predictable insensitivity, but in many cases we should try and cut people a bit of slack, I think.

This is new for us all. It is a test for us all, we can help each other, stay as positive as we can and hopefully emerge better, more decent and more caring as a result. I might post a few TV and book reviews from time to time, but if you fancy a natter, get in touch.

Posted by Michael Taylor at 12:03 pm No comments: 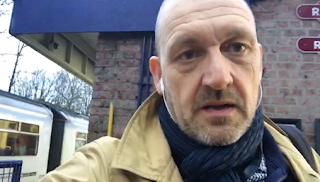 After five weeks of hard work, and a lot of train travel, Channel 4 Dispatches' "Britain's Train Hell" is airing on Monday 16th March at 8pm on Channel 4.

I helped out by talking through our experiences on the line from Rose Hill or Marple into Manchester Piccadilly and home again, and submitting a video diary. The producer has written to thank me for my contribution to the film. Many other people submitted video diaries, and they have tried to use as many of these as possible, but have a watch on Monday and see if mine is in there. If it isn't then I'm fine with that, because if someone else can give their powerful and personal testimony in a far better way than me, then brilliant.

It's more important we keep this message up that our trains are unacceptable. They are still shocking. I actually dislike the Sprinters as much as the Pacers. I love the beautiful long new electric trains that run from Blackpool to Hazel Grove, but we can't have them, we still have antiquated diesel cast offs.

Give the programme a watch and do let us know what you think.

Posted by Michael Taylor at 4:31 pm No comments: 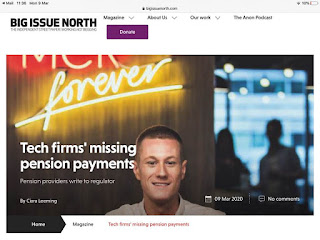 Over the course of the last year or more I've done a few blog posts about a corrosive element of Manchester business that wasn't been held to account. One was a talk at Alliance Manchester Business School, here. Or this one about policing the boundaries of a community, here.

The media seem to have precious few reporters and editors prepared to dig in and do a story exposing wrongdoing. There are many reasons for that: some have become supine, some are complicit and others lack the resources.

So fair play to the bravery of the The Big Issue in the North, under the editorship of Kevin Gopal, in doing a story about missing pension payments by a bust company director with multiple identities, who also claimed to run a charity.

Go out and buy this terrific little magazine and support the work they do.

Or if you're out of range, read this excellent story here.

And shame on those who have supported and boosted the people who are doing such harm to the reputation of our city.
Posted by Michael Taylor at 12:22 pm No comments:

Lunch of the month for February - Refuge 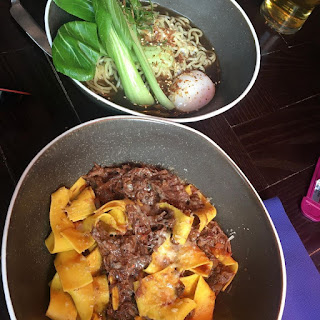 Lunch of the month for February was from a fairly lean field as I was away for a week of a short month. But it is no less a mark of quality as it was the Worker’s Lunch at the Refuge. They rotate the menu depending on the week and on the day I went we were fortunate enough to have a choice which included a gorgeous chunky beef ragu in tomato with thick ribbons of pasta (which I had). My lunch pal Steve Kay had the vegetarian noodle soup. For £7 a head it’s really decent.

I was also treated to a lunch at Tast, which was long overdue - both for the company I was lucky enough to have - my mate Michael Finnigan - as well as the restaurant. However, really, honestly, this exercise is about something you grab and is under a tenner, ideally, rather than a culinary experience. Tast was a Catalan taste sensation, so I'm just putting that out there.

Also impressive this month was Hanoi75 in the pop up paradise that is Hatch, under the Mancunian Way - and it was a very well blended box of veg, chicken and noodles.

I also really enjoyed a gloriously dirty Katsu curry from Nudo. Sometimes when it’s cold and wet (and it was wasn't it, February really made me shiver) it is just what you need. Katsu like this has a taste and texture like the very best Chinese takeaway curry I remember from my youth, Woo Ping in Lancaster.

Keep the suggestions coming, and if I've not seen you for a while, let's grab lunch!

Posted by Michael Taylor at 12:13 pm No comments: