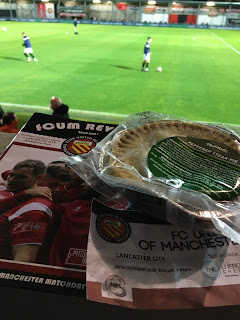 So I took my seat on the front row of the main stand at Broadhurst Park, home of FC United of Manchester. I placed my programme, my ticket and my Hollands Pepper Steak Pie in front of me and paused for breath. Some of the Lancaster City substitutes were warming up, knocking the ball back and forth to each other. The tannoy was playing a Jam song, I think, and there was chatter around me about other things than the game we were about to see. And never have I felt happier to be in a football ground.
The last game I'd been to was Blackburn Rovers v Swansea City at the end of February, seven months, two weeks and five days earlier.
The pie, the Bovril and the smell of football were the first things I sensed. But as the match progressed it was other things that reminded me why watching matches on TV has been no substitute.  It was a decent, physical, boisterous game which ended 1-1. Lancaster should really have won, but you notice so much more by immersing yourself in a game over 90 minutes. You see how players move off the ball, how the bench communicates to them and what the shape of either team is. But even with just 600 people in a tidy new stadium like this, and everyone sensibly observing social distancing, there was a decent enough atmosphere. I never thought I'd enjoy hearing "liner" getting verbals from the home fans as much as I did. Maybe I'm wrong, but I think he enjoyed it too. The players certainly did. There was plenty of good old fashioned shithousery and off the ball niggling for it to rile the home fans. For Lancaster it was one of the bigger crowds they get to play in front of and the players relished it.
That was it really, the collective experience. It's what makes us human and it's what makes football more than a game. Football without fans really is nothing.
And it was another new ground, obviously not one of the 92 (or 91 this season), but the 159th ground I've watched football on.
Posted by Michael Taylor at 8:42 pm No comments:

There are some days in your life that stick in your mind for years afterwards. July the 22nd, 2015 is one of them. As was usual back then I hot footed it down to London for an event in Moorgate at the HQ of one of my then clients, but this was different. It wasn't a business do, but a political one, and that was my world that summer. I was pleasantly surprised to be signed into the event by our former babysitter, and good family friend Ciara Hogan, a student at LSE at the time. I had a chat to Alison McGovern MP and arranged to meet up, which led to an enduring professional friendship with her husband. I was there with another pal who I'd got closer to over the summer months of the Labour leadership contest and while we were chatting he invited me to his wedding later that year (we're still good mates and he's still married, that's not where this is going).

The occasion was Tony Blair was speaking. He was trying to get the Labour Party to come to its senses and not elect Jeremy Corbyn. The speech, the interview, the takeaway message was quite brilliant, you might remember it - he said, "if your heart says vote Corbyn, you need a transplant" - but as we all know it was, like most recent political campaigns I've ever been involved in, hopelessly doomed.

But it was also the first time I saw Matt Forde, who interviewed TB on stage and was everything that day that he's ever been since: warm, welcoming and very, very funny.

I've since seen him do stand up twice live and he just gets better and better, Matt Forde that is, not Tony Blair. You might then have quite rightly guessed that I'm a fan. I've listened to pretty much all of his podcasts and he never ceases to surprise. His interview style is respectful, sharp, but he also invites the subject into a space where they rarely get to go, thus we are treated to rare glimpses of their character and motivations.

Last year, before a gig at The Lowry in Salford, I even managed to interview Matt for a little video I did (and have foolishly deleted) when I was standing in the Euro elections of 2019. I slipped in a podcast joke that he didn't see coming, which was a personal highlight. 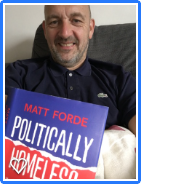 He's now got a book out with a title that perfectly sums up my own status, Politically Homeless.

I devoured it over a weekend, the Saturday of which his team (Nottingham Forest) beat mine (Blackburn Rovers), something to which I was sublimely indifferent to.

It's more than a memoir, but it tells us a lot about his life. It's not a manifesto for the future, but it's brimming with good ideas. And it's not a handbook for political activists, but the tips are priceless.

Paul Wright, a lovely bloke who's been selected to contest our local ward for Labour has it on his Christmas list, he told me over Twitter. I'd suggest he read it now. He'll learn not to organise a photocall to clean graffiti off a wall with only Waitrose Evian water to hand; he'll perhaps be comforted that however dysfunctional and fractious Stockport Labour Group is, at least it's not Stoke; and he'll be given a re-affirmation of why Labour activists really, really hate Liberal Democrats (though living round here he knows that already). I'd give Paul my copy but it's signed by Matt and it's going on my political bookshelf next to prized signed tomes by Gordon Brown, Peter Mandelson, Tony Wilson and Andrew Marr. That's how much I liked it.

A few weeks after the Tony Blair event I got to interview someone on that very same stage who had lived an extraordinary life. I remember thinking, how do I get great stories out of a guy who has been played in a Hollywood film by Leonardo di Caprio? I deployed some of Matt's techniques of building a rapport with the audience and realising that sometimes the obvious question everyone is thinking is the best way in.

On top of it all the book is a powerful statement too in favour of the values of the Britain we want to be - warm, welcoming, and funny (have I said that already). So go on, buy it, read it. Whether you're a political anorak like we are, or just want a good laugh, then I guarantee you won't be disappointed.

Posted by Michael Taylor at 12:11 pm No comments:

The conveyor belt of outrage - I've stepped off

I've 'sort of ' disengaged from Twitter. It's become such a festering hell site of anti-nuance, I've decided to observe, rather than participate. I can't quite bring myself to delete my presence, and I do need the platform when I want to punt out a blog (like this) so I'm working through the process of blocking the most aggro people who seem to love loading on to the conveyor belt of outrage, and easing it out of my field of vision.
I just don't need it in my life, so I'm starting the detoxification of my world by withdrawing from the places where the discourse is so shouty and angsty. One of my favourite writers, Ian Leslie, put it well, so I'm going to quote his passage in full: "Public debates are becoming more algorithmic and binary. You must pick one side or another, and when you do, there is always a ready-made script waiting for you to run. When Tory ministers defended Dominic Cummings over his trip to Durham, it wasn’t just what they said that was depressing but how: in a series of near-identical, robotic tweets. More of us are behaving like politicians. Every row on social media is conducted with a set of arguments, slogans and memes that each side – and in binary arguments there can only be two sides – faithfully deploy."
I guess Twitter is where the debate happens, and it's not just about politics, but sport, especially football. Elsewhere, despite the data scraping and social manipulation, I find Facebook to be more carefully curatable. LinkedIn is mostly corporate boosterism, but at least it has some useful well argued content. And Instagram? Ah well, Instagram is my new vice. It may be harmful for young people trying to live up to an aspiration of image perfection, but for me it's the comforting balm of aesthetic comfort and joy. I love the stimulating drip of goodness than oozes onto my feed, mainly outdoor landscapes, but also photos of food, art, weirdness, shoes, jackets, jeans, retro photos and more music ideas for our programme. The universe it creates is one of walks I want to go on - the Camino, the Appalachian trail, the Wainwrights, the Munroes and the peaks of Snowdon - in boots and fleeces I want to wear. It gives me visual recall of cities and open spaces I’ve only got fading memories of, such the gorgeous South of Western Australian and the deep outback, oddities like Tallinn, Berlin, Marseille, rural Italy, Miami and many more. That's what I need in my life, something to look forward to. It's what we all need, frankly.
Call it escapism, but I’ve done with reality and I’m done with Twitter.
Posted by Michael Taylor at 7:50 pm No comments:

I had great pleasure in joining my old friend Frank McKenna in conversation last week. Inevitably, we're having to adapt to all kinds of new event formats during isolation, lockdown and working from home. This was an old fashioned two-way interview, conducted over Zoom.

We covered a lot, spanning the time we've known each other. The state of the regional media, social media, my first novel and the state of fiction, politics, mental health and my job at Manchester Metropolitan University.
Posted by Michael Taylor at 2:26 pm No comments: