The scandal of Bredbury Hall and the bad banks

I wish I had a pound for every time I've been asked if I miss being a frontline business journalist. I don't, but I recalled the best of times this week when I watched BBC Panorama on Monday night about how Lloyds Bank treated Bredbury Hall Hotel (left). There was also a terrific investigative story on The Business Desk by James Graham.

On Panorama the BBC's Andy Verity and James have dug into what Lloyds inflicted on Bredbury Hall, once one of their former prized clients, featured in a promotional video. First the owners had the squeeze put on them, then their debt was packaged and sold off to a distressed fund.

One of my clients now is Seneca, a business that works hard to unravel the problems of the past in order to help businesses seize the opportunities of the future. That means helping companies who have been sold complex products by banks - often called 'swaps' - and acting for them on redress and assisting them to get back to health. Tim Murphy of Seneca has argued in front of a Treasury Select Committee that this behaviour by banks requires a completely new approach to redress for how the vast bulk of Britain's business can tackle such abuse by their banks.

"Businesses need an ombudsman with teeth, at present only microbusinesses (less than 10 employees and with sales under Euro 2 million) can apply to the Financial Ombudsman Service. Apart from the courts and the banks’ own internal complaints departments there is nowhere for other businesses to go," Tim says in a paper we're releasing next week.

For all his rhetoric Liberal Democrat Business Secretary Vince Cable has been weak on the banks. It's been left to the media and a few campaigning lawyers I've worked with like Alison Loveday at Berg and business organisations like Downtown. Some politicians have acted vigorously on behalf of the constituents - Jack Straw being one - but it's been driven home this week that the media has a positive and important role to play.

Yes, it reminds me of the importance of the media in campaigning. But I wonder if Bredbury Hall could have been better served by their local politicians too.
Posted by Michael Taylor at 8:56 pm No comments:

The beating of Leeds, reconnecting club and fans again 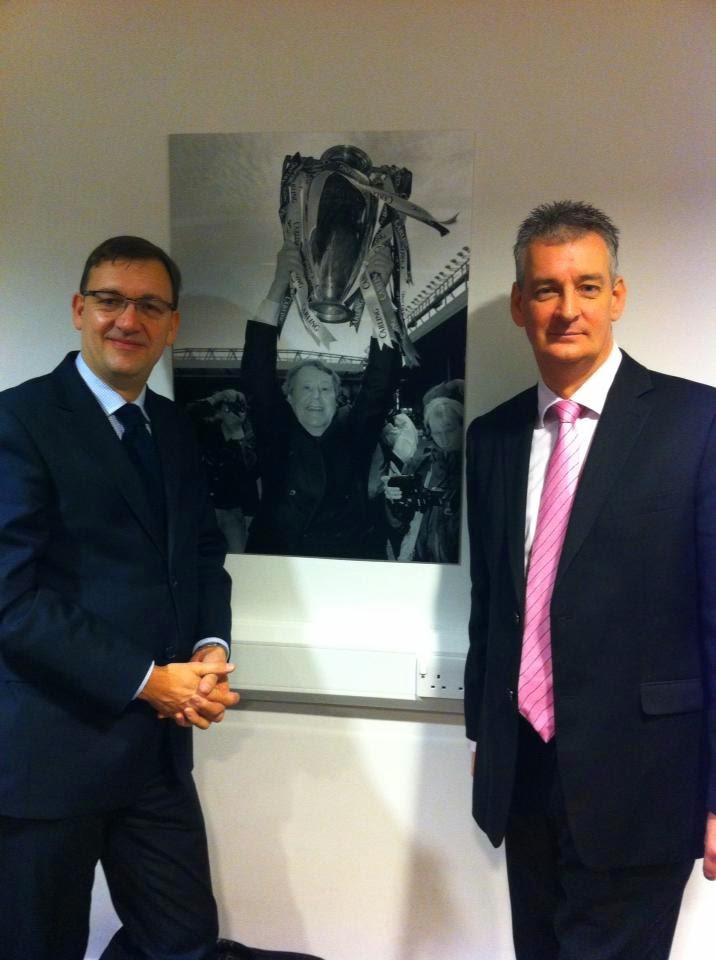 When Blackburn Rovers fans of a certain age are gathered together, nostalgia bursts to the fore. So it was when I did an event at Ewood Park with Graham Jones, the MP for Haslingden and Hyndburn (pictured above with a Jack Walker portrait).

Even though our early memories are of Second and Third Division football, the high watermark for football, entertainment, emotion and atmosphere was in the mid-1990s. Foremost amongst those memories was a 1-1 draw with Leeds in the title winning season. It had incidents aplenty and was a powerful statement of intent that this was a team ready to fight even when down to 10 men. I think it was the best performance I ever saw from Alan Shearer and there were plenty to choose from.

So there we were on Saturday with a full away end and Rovers riding high. I don't think I have ever enjoyed an undeserved win as much in years. It felt like it should do at Ewood Park. The players responded to a plea for a fightback, something that's been lacking. It felt like there was a connection between players and supporters again.

That's what has been missing. Football is such an important part of everyday life and the clubs are a centre of the community. But as I've banged on about before, there's a danger it's disappearing up its own greedy orifice.

Fair play to Graham Jones then for the tremendous work he's done in seeking the truth about the ownership issues at Rovers and for supporting the Labour policy on football involvement in clubs.

A summary, from Graham:


The plan, which has been drawn up in consultation with 95 football supporters’ organisations, and which are fully in accordance with European competition and procurement law, would require supporters to come together to form a single accredited trust in return for the right to:appoint and remove up to a quarter and not less than two of a football club’s board of directors; purchase up to 10 per cent of the shares when a club changes ownership, if they so wish.

Supporters made clear during the consultation that this is the only way to ensure those running clubs share information, power and responsibility with them. Labour's proposals mean fans could hold the owners of their club to account on all issues on and off the field including ticket prices, shirt sponsorship, ground naming rights, and changing the colour of the strip or the name. I am sure Newcastle United and Cardiff City fans will be very interested in these aspects of the proposal.

At Ewood I have detected a desire on the part of the management to rebuild what has been destroyed over the last few years. The future of the club will only be meaningful and successful if a new covenant with the fans is created.
Posted by Marpleleaf at 9:30 pm No comments:

Rose Hill Station - a great place to walk from too 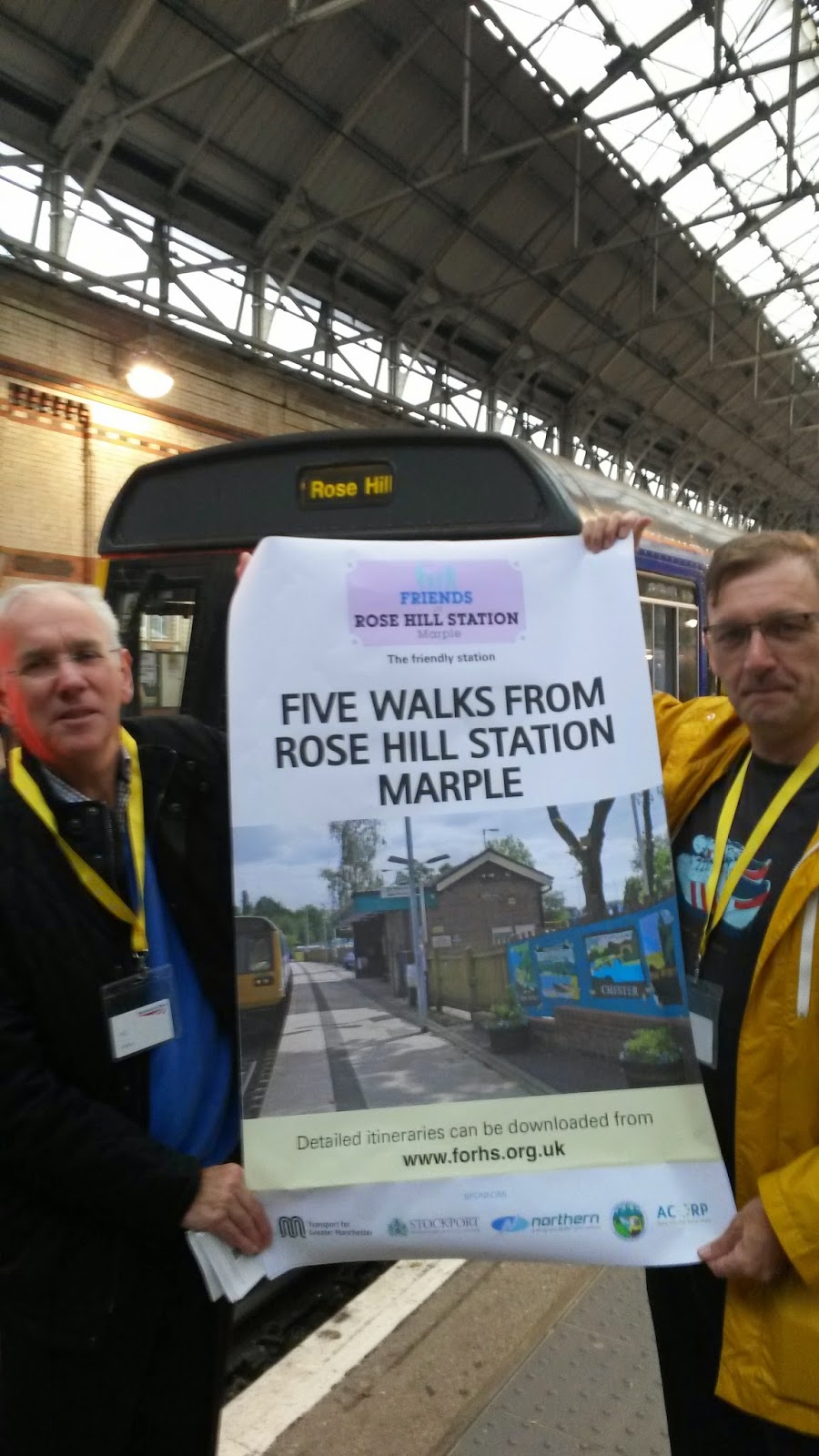 I was delighted to be asked to get involved in the Friends of Rose Hill Station, our local station. David Sumner (pictured left), who chairs the group, has worked wonders with the other volunteers in creating a delightful ambience around our small and perfectly formed terminus.

At the end of October we launched a guide to walks around the Marple area that are all accessible from Rose Hill. The idea is to work with Northern Rail to increase passenger numbers and usage of the station, but at the same time campaign for a weekend service and a far better frequency of trains in the evenings.

We were delighted with the launch and thrilled with the support we received from the Marple Ramblers. It's certainly one of the aspects of living around here that many people enjoy.

The leaflet is now available in the station at the booking office and in the library at the waiting room, as well as around Piccadilly Station and local tourist information centres around Manchester and the wider area. 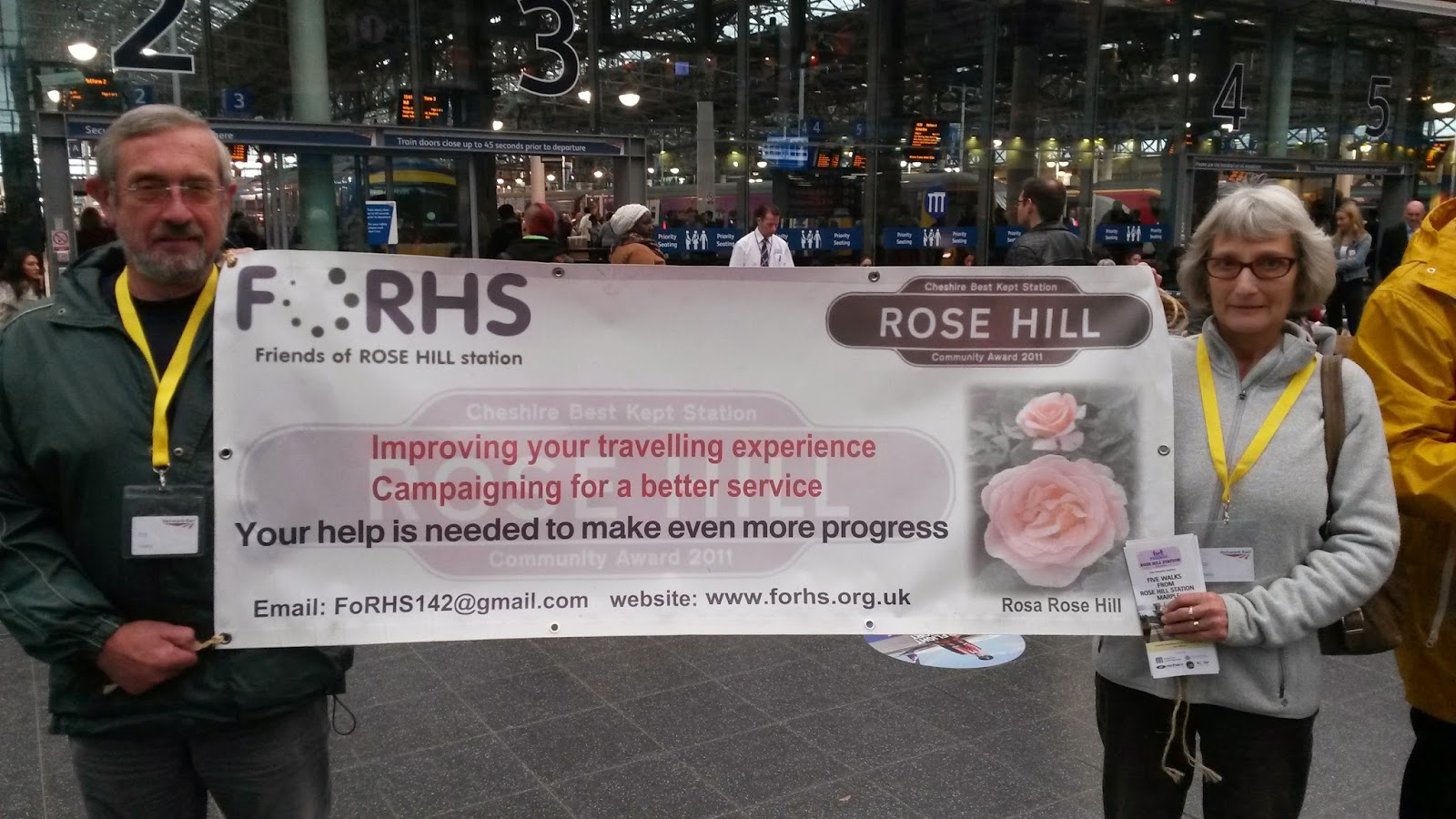 There is a serious campaigning edge to the work of the Friends too and we've had some extremely productive and frank discussions with Northern Rail. Most recently, a squad of volunteers have been monitoring passenger numbers.

Anyway, do visit the station and get in touch if you'd like a guide.
Posted by Michael Taylor at 8:14 pm No comments: