Left Out - The Inside Story of Labour Under Corbyn 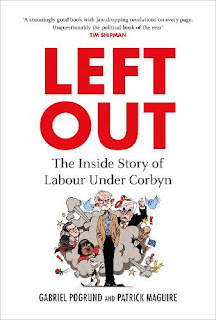 There are good friends of mine who can't bear to pick up this excellent book and learn more of the inevitable feuds and mishaps within the inner workings of the Leader of the Opposition's Office (LOTO). It's too raw, said one, who worked in a previous Labour government and would be tipped over the edge. Especially as the consequences of this protracted self-indulgence is a destructive Conservative government.

Anyone who has followed this blog and my own political commentary will know where I stand on all of this. I never thought Jeremy Corbyn was even a suitable candidate for leader, and evidently, neither did he. I never trusted, or liked, his inner sanctum. Quite why I was right in that sentiment howls out of every interview and source that Patrick Maguire and Gabriel Pogrund speak to. And so I look back now and feel there was an inevitability about it all.

Given we all know how it ends, and that it pretty much confirms every prejudice I had about many of the key people featured in the book, there isn't much that is surprising, but I'll come onto one significant factor shortly.

But though it isn't surprising, it is still shocking. I mean genuinely, gasp inducing, out loud guffawing, jaw dropping, really shocking. There is something on pretty much every page that is worse than anything the writers of the Thick of It could invent. Many other reviewers have picked up on particular standout moments, but mine was the plan to topple Tom Watson just before 2018 conference, a plan that failed because Claudia Webbe was late. Or that Andrew Fisher was upset that Corbyn had a nickname for Seamus Milne, but not him. None of the personalities come out of it particularly well, the accounts of bullying and fawning around the leader are particularly toe curling.

The whole narrative of the story is built around a number of clumsily enacted catastrophes - internal division, anti-semitism, Labour Live festival, Salisbury, Brexit, parliamentary chicanery and the General Election campaign of 2019. At all points Corbyn's lack of leadership qualities make Labour's dysfunction worse.  All you learn is entirely consistent with the prickly old man we sometimes saw on the news, slamming car doors and demanding of interviewers - "can I finish?"

If behind the scenes at "the Project" resembled a bunch of bickering children, you are left to wonder who the adults were. Diane Abbott seems strangely absent, Len McCluskey lurks around every corner, but one figure emerges as a tragi-hero, John McDonnell. He at least recognises that the left have a moment to make a mark and achieve power, but seems powerless to stop their worst instincts from consuming themselves. I don't actually think there is a great deal between him and his leader on policy issues. It seems amazing to me still that much of the left chose to dig in so damagingly on anti-Semitism. Having put to one side their lifelong opposition to nuclear weapons, Irish republicanism, NATO and nationalising the commanding heights of the economy, it's peculiar that they seemed so militant about this one issue. McDonnell seems to understand the need to triangulate and pick the battles that can be won. It's not "tittle tattle" that caused a serious fracture in the relationships, but a defining characteristic of a politics that wants to stand up for a principle, and one that wants to shape society according to those principles.

This is a fair, balanced and detailed account that tries to work out what went wrong, from their high watermark of hubris at Glastonbury in 2017 to Keir Starmer thrashing their candidate in the 2020 leadership election. It has a level of introspection that all failed political projects have to subject themselves to, including the one I was briefly involved in that gets a mention, The Independent Group for Change. By overly focusing on the Westminster and LOTO operations and less on the grass roots from where this movement came, it is open to the criticism that it only tells half a story. I don’t think that’s grounds to dismiss this work though, because with leadership comes a deep responsibility to do what you promised. Another history would show how Corbynism inspired hope, then dashed it, across the Labour Party in different local branches and constituency parties, and how that played out on social media. But that would be a different book, albeit one that would still include stories about Claudia Webbe. As John Harris says in his peerless review of this, and another account by someone I don't like, the one group of people that doesn't get a look in, or a hearing, are the voters who were turned off by what was evidently a wholly unappealing rabble.

Postscript: this review by Stephen Bush in the New Statesman is also very good.

Posted by Michael Taylor at 4:25 pm No comments:

There was something about the whole country being locked down together that helped us feel we were part of a collective effort to do our bit.

Last week we got the news that one of our sons had been with a mate who'd tested positive. He felt a bit rough and had to get a test before going back to university, which came back positive. We got tested as well and were negative, but rules is rules and we have to isolate for two weeks. I'm not going to lie, it's been horrible. Much as I want to put a stoic face on it, I'm struggling with it. We can't leave the house, Max can't come home on his leave, everything is delivered, and I think the worse of it is that we were edging towards returning to work, college, walks and the gym. And I've had to pre-record from home our second Music Therapy programme, with embarrassingly disastrous consequences.

But we are healthy and well. No symptoms, no real drama. As ever, Rachel is far more cheery than me and has raised our spirits. We are counting our blessings and very much looking forward to celebrating her birthday this week in a spirit of togetherness. This will pass and we will have a chippy tea to mark the end of our isolation next Friday.

Posted by Michael Taylor at 4:17 pm No comments: 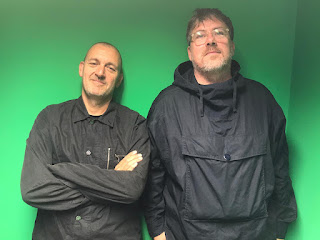 On Sunday nights from 9pm until 11pm me and my mate Neil Summers are going to be playing a few records and telling stories on a new show, Music Therapy on Tameside Radio 103.6 FM. It's a breezy mix of the new and the familiar, designed to end the weekend on a blissed out way. I think of Neil as my far more clued up younger brother, nudging me to appreciate richer, deeper and more exciting music. There's no such thing as a guilty pleasure in our book, just an open mind and a love of great music.

You can listen to us live here. We'll probably get round to setting up a website with mini features, extended interviews and playlists. Possibly.

Massive thanks to Chris Bird and Andy Hoyle at Quest Media for giving us the chance.