You just never know what opportunities life is going to throw in your way. That was my biggest take from a year of massive highs and lows.

The sad stuff first. We lost Hazel. Too soon and too painful, but forever loved. And Geoff Unsworth and Teresa Hawksworth, both so kind and warm and a cruel loss. Ian Hawksworth's eulogy to his wife, and the mother of his children, was as powerful and loving as anything I've ever heard.

Our debate forum Discuss has had a storming year - we're really thrilled with the progress we made - doing podcasts and putting on first rate debates - the real high points were our religion ding dong with Polly Toynbee and Bishop David Walker and the fracking fracas with Kevin Anderson and Bez.

My involvement in Discuss has really energised my involvement in popular debate and politics. I've seen some fantastic debates - Juergen Maier on Europe was outstanding, Tom Cannon on Football was pure poetry, but it was also contributions from people with a strong personal viewpoint who weren't academics or professional politician - guys like Steven Lindsay, Graeme Hawley and Tracey Smith, and then there was Bez, the longest ten minutes of my life from the moment I said: Ladies and gentleman, here's our first speaker... To be fair, he was on the winning side!

Saw some inspiring and thought provoking talks - the Blue Labour conference in Nottingham was probably the event with the deepest and widest range of provocations my friend Michael Merrick on education and Greenpeace's Ruth Davis on Nature, Science and the Common Good.

The best speech I wasn't at, but listened to on the RSA podcast, was Jon Cruddas's lecture on Radical Hope.

I long ago gave up on the main hall at Labour conference providing any of that, but the fringe had some real highlights - Liz Kendall on the personalisation of public services and Maurice Glasman on community organising - "the time it takes an activist to interrupt someone who is talking about something important to them - 8 seconds. The time that a stubborn interruption could be useful - 30 seconds." Personally, I think you can read some situations where even longer works. Listening always works.

Writing - got into the final of Pulp Idol - a first time writers competition. Making good progress on my debut novel getting published in 2015.

Work wise - I've really enjoyed being part of the Manchester conversation with Downtown - sitting at the table for some of the vital policy conversations that are contributing to the growth of Britain's best city, just as devolution rises up the agenda, providing a positive and progressive contacts and a context for the best business network in the North.

The work for Seneca, Liberty and the Tomorrow's Practice project for the ICAEW has been a real privilege, working alongside fantastically clever people creating businesses that are thinking hard and evolving in a challenging world.

Finally, I was selected to be Labour's parliamentary candidate for Hazel Grove for 2015. As described in the Stockport Express, Prolific North and the Business Desk, it is a big new step. But more than anything this represents a privilege and an honour, it is an opportunity to build a new covenant and a new way of doing community politics in this constituency.

Posted by Michael Taylor at 8:23 pm No comments:

I love London cafes. They're a disappearing facet of a city that is changing before our very eyes. Some of our old favourites from when I lived down there seem to have gone, like Alfredo's on Essex Road. Today my bessie mate John Dixon took me on a stroll to one I'd not been to before - E Pellicci in Bethnal Green Road, just around the corner from where the Kray twins stalked their manor from their home on Vallance Road.

Yes, my escalope was tasty. John's egg and chips were spot on too, but it wasn't just about the food. What made it so special was a slice of London life - it was rammed, so you just pile in and share a table, pairing up with a smart metropolitan couple and then we were joined by an 88 year old Eastender and her daughter. We talked about food, change, life and salt levels in white bread.

The staff worked the place hard, they kept checking you were alright, it was busy and noisy and full of love. They got everyone singing happy birthday for a regular punter, it was warm, funny and cosy. John got given a cake as it was his birthday too.

In a moment of drama I dropped my glasses down the side of our table, then realised I didn't have my phone either (I'd left it at John's office, it turned out). The staff turned the place upside down looking for it, offering to locate it, even as the place was filling up to the brim. So no selfie, no picture, so I'm trying hard to throw as much of the colour of the place as I can - wood panel walls, a tiled bar, chrome exteriors. But its character and colour was a mood, a feeling and a wonderful authenticity.

Queuing up as we were leaving was the Young Soul Rebel himself, Kevin Rowland, just thought I'd mention it.

Next time I'm in visiting my friends at Intuit UK in Victoria I think a trip to the Regency Cafe is in order.
Posted by Michael Taylor at 11:03 pm No comments:

Three generations of first born Taylors at the Rovers 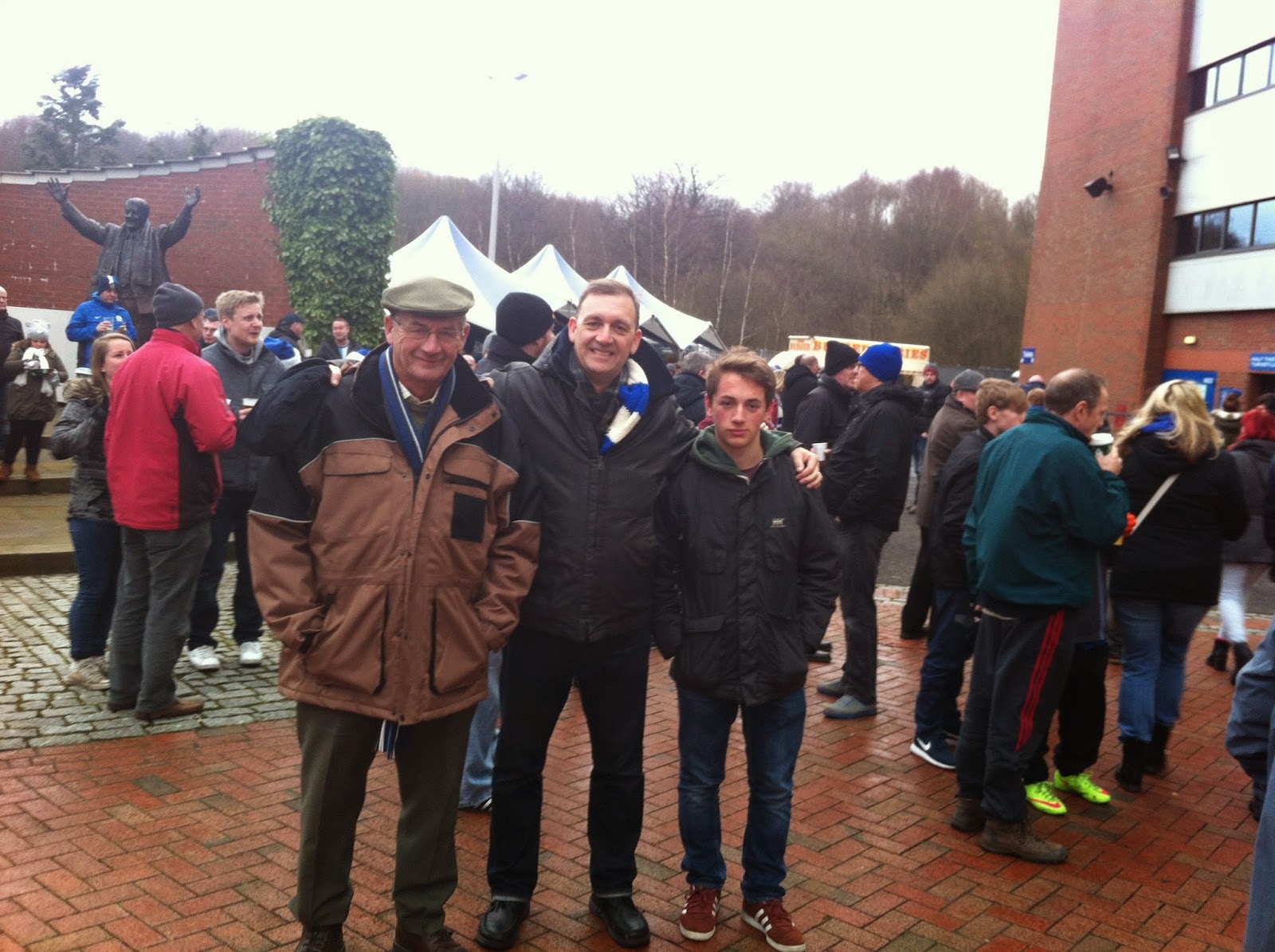 We had a lovely day at the football today in a place that holds so many memories. That the opponents were Charlton Athletic had a certain resonance. Me and my Dad saw Rovers beat them at Wembley in 1986 on a day I'll always cherish.

My Dad also told me a story of how he saw his first ever first division match between Blackpool and  Charlton with his Grandfather in the late 1950s.

Me and Joe remembered the 2007 end of season game which relegated Charlton thanks to some flukey goals. A day when all of the fans united in a minute's applause for Alan Ball who had died earlier that week. It was the first time it had ever been done and felt right.

The game today was a good three points, some good chasing in midfield - a couple of goals from Jordan Rhodes, who proved why it's going to be hard to hold on to him in the transfer window, especially with the financial fair play rules meaning Rovers are banned from transferring players in.

But all these football issues are just a backdrop to the real meaning of these days. Time, doing things we enjoy, with the people we love. Here's to many more happy days and family memories.

Posted by Marpleleaf at 9:13 pm No comments:

Proud to be selected as Labour's parliamentary candidate in Hazel Grove 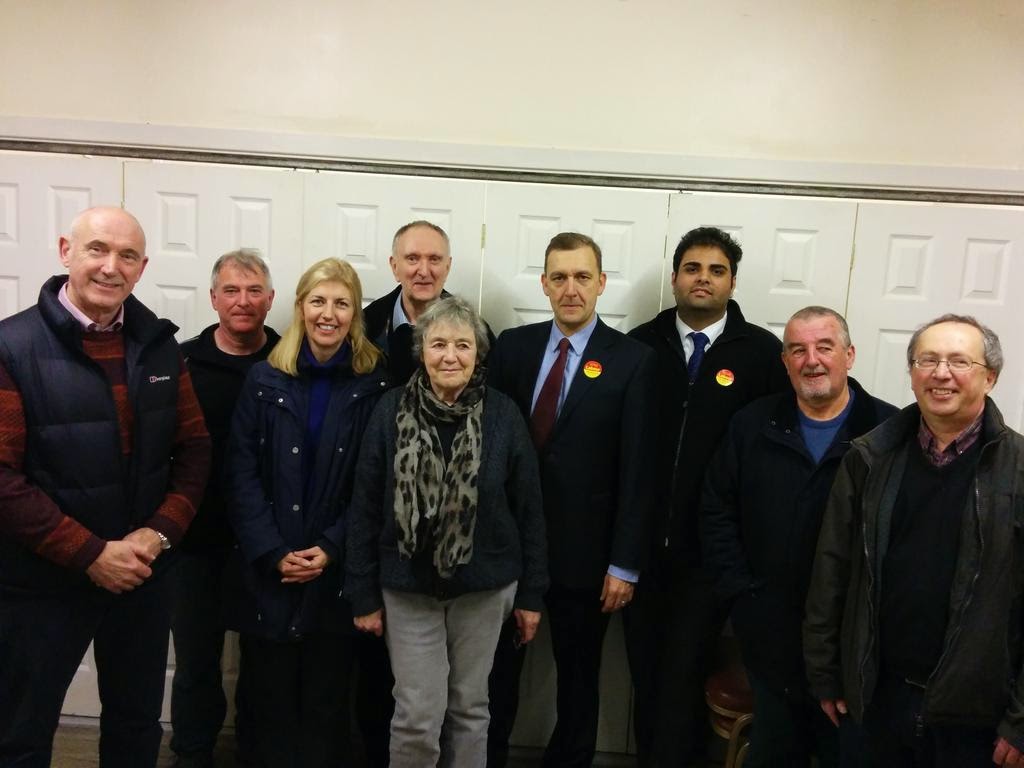 Tonight I am extremely proud to have been selected as the Labour candidate to fight the Hazel Grove parliamentary seat at the next General Election.

We have 5 months to persuade voters to break their habit of voting Liberal Democrat and thinking it will somehow get them anything other than a Tory government.

With typical brass neck the Lib Dems will be campaigning against their own record in Government. They will peddle that line that annoys me so much – that “Labour can’t win here”.

Those mathematically inaccurate graphs aimed at voter suppression. Urging our people to stay at home. How patronizing. How anti-democratic.

The Conservatives today have shown as a sham their record on economic competence – the deficit is still there and the national debt is rising. As I said on the BBC ONE O CLOCK NEWS today the Labour leadership in Northern cities like Manchester have led the way in developing the momentum the Tories are claiming credit for.

George Osborne kicked the can along the road today on business rates. Offering a review instead of reform, something that will do nothing for our hollowed out district centres that are kept alive by enterprise and ingenuity, but deserve the fair rating system that Labour propose.

Yet, they will tell the large numbers of self-employed and small business owners in this constituency that they’re on their side. I run my own business. My Dad is self-employed. Until recently he even had a white van. All the good companies I’m involved in now share the ethos of fairness, courage and supporting their staff. And as a business journalist for 20 years, I know what GOOD business is all about: inclusive, hard working and enterprising. They are my values and they are Labour values.

Ours is a vision for everyone having a fair chance, a good start in life and a country built on the efforts and endeavours of working people having a stake in its success.

Proud of our achievements in government – humble in our determination in opposition to fight for our people to re-earn their trust so they will turn out for us so our party can govern again with the message of radical hope we offered in 1945, 1964 and 1997.

I’m going to be an energetic candidate on the doorsteps, in hustings, at events, public meetings, debates, on Facebook, Twitter and YouTube. Wherever the people are.

But my biggest asset will be the wonderful people of this community who I will work hard to campaign for and with.
Posted by Marpleleaf at 11:51 pm 2 comments: