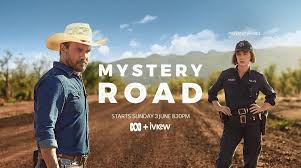 On my telly review posts I’ve dipped into Welsh noir, which has been surprisingly good. I’ve also been immersed this year in Australian TV drama, which has been a bit hit and miss.

But generally speaking, if you watch a few series, you see the same strong lead actors pop up again and again. This is both a blessing and a curse, but the strength of each one is the very powerful sense of place and the leading character's relationship with it, in the absence of other characters to rub against. So much so, it’s hard to imagine any of these storylines crossing over to the UK or the US. I touched on The Code, Top of the Lake and Cleverman here, but here's a bit of an update on a very promising run of form from Australia.

Mystery Road (ABC and on BBC4) - Australia has the blessing of locations and landscapes that take your breath away, used to great effect by Ivan Sen, the director of the original feature film Mystery Road, and Rachel Perkins, the series director who made much of the setting in the far north of Western Australia. But as well as the landscapes this 6-part spin off from the film of the same delved right into the rural tensions between Aboriginal people and the anomie of young white kids in such isolated sparse locations in a hyper connected world. Something social media and organised drug gangs don’t necessarily respect. Beyond the sparkling performances of the main cast however some of the acting is comically bad, something you suspect the writers and directors know. Subsequently a lot is asked of Aaron Pederson as lone operator detective Jay Swan and Judy Davis as the local law enforcement stalwart Emma James. A good story, well told, looking forward to more from this crop. 7/10

Secret City (Foxtel's Showcase and Netflix) - Set in Canberra and set up as a House of Cards style conspiracy thriller, this jogs along nicely and takes some brave twists and turns with both geo-politics and casting a trans character. Anna Torv is a real star as journalist Harriet Dunkley, but some of the politicos are right out of The Thick of It with some very strange motivations of characters which seem a bit fanciful. But frankly I can believe anything these days. 7/10

The best acting in any of these recent televisual tours Down Under has been from Rebecca Gibney as Lola in Wanted (Seven Network and Netflix). It’s a woman-hunt road movie which jumps over to Thailand and New Zealand, as well as making great use of the expanses of South Australia’s outback and Queensland. As well as being a tense and believable thriller it’s also very warm and witty and tests your patience with complex characters. 8/10

Finally, Deep Water (SBS and BBC4) a fairly gripping cop drama set in Sydney. It had the usual macho corrupt cop that seems a staple of all Aussie drama, but touched on some strong social issues around homophobia and ethnic diversity in Sydney. 7/10
Posted by Michael Taylor at 10:48 am