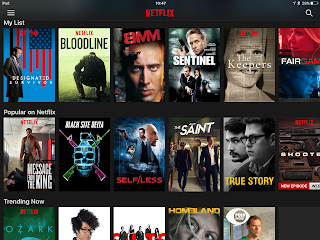 You don't need another article by someone from my generation (X, Y, etc) to observe with bewilderment at how media consumption is changing. But I do think we are in something of a golden age of television.

How you consume though is everything. I really enjoy the binge watching of a series and it has totally altered the way our attention spans pivot around a programme. Being married to a teacher not all of these have been shared experiences, one of us doesn't have the time, one of us travels on trains a lot. But the ones I enjoyed the most, we enjoyed together.

Here's what I've been watching over the last year since what I thought were the peak telly highs of Stranger Things and Narcos.

The Fall (BBC) - we gave up on this creepy, rapey, sexist crap. Should never have been broadcast. Outrageous. 1/10.

The OA (Netflix) - I didn't really get into this. The twists and turns seemed like strange leaps into the unknown and in the end I skipped a few to find out what was going on. 4/10.

Homeland (C4) - I thought Homeland had run out of steam around series three, but this last series probably cemented its place as a decent but run-of-the-mill spy thriller. The Trump election probably ruined the narrative about America's new place in the world and the characters rather fizzled out. 5/10.

Cleverman (ABC- iPlayer) - an Australian thriller, set in a dystopian racist future with the emergence of a secret race of "hairy people" or "subhumans" in a corporatist police state. Sometimes I wish they'd just get on with it, there's not quite enough going on, and I'm struggling to see the shifting motives of two of the lead characters. 6/10.

Taboo (BBC) - Tom Hardy's grunt fest was a real mixed bag. In parts brilliant. In others just a load of incomprehensible mystical tosh, which I admit is a harsh verdict given how forgiving I've been of Twin Peaks. By the end it had all the elements and you could truly smell the filth of London's dirty streets and rivers. 6/10.

Twin Peaks - The Return (NowTV) - strangely, I don't think I could handle binge watching Twin Peaks. It would be too much to handle. It started off with so many disparate strands and red herrings thrown to the winds that it seemed aimless and directionless. Just as I was losing patience with it came the outrageous 8th episode (Got a light?). It was off the scale Lynch weirdness, creepy, dark, ugly and needlessly violent. Unforgettable television that had as many theories as it probably had viewers. Since then it has started to draw the fragments together, from the first half and from the first series 25 years ago and from the film Fire Walk With Me. It is a masterpiece, for all it's flaws. Whatever happens now will be unable to be repeated by anyone. What Lynch has done is to graft onto an old project something that feels like a lifetime of work and creativity, sometimes with the sense that a director is indulging his fans and his  own imagination. 7/10 (points deducted for needless indulgence).

Ozark (Netflix) - billed as an heir to Breaking Bad this was always on a hiding to nothing. But I liked it and was gripped by the end. Sympathetic characters were in short supply, but the stars of the show weren't the entitled money laundering Chicago family, trying to make a mark in the sticks, but the roughnecks of the Missouri Ozarks, especially the dysfunctional Langmore clan, exemplified by an outstanding performance by Julia Garner as Ruth. But for me the real show stealer was Peter Mullan as Jacob Snell. 7/10.

Top of the Lake, season 1 (BBC) - I came across Top of the Lake series one quite late. It was glorious to watch, unnerving and full of suspense with a series of jaw dropping scenes starring Elisabeth Moss, again. And Peter Mullan again, this time with his Scots accent intact. 8/10.

Top of the Lake, season 2 (BBC) - I was pleased that season two was made available all at once on the BBC iPlayer. It was hard going at times. Though I have a soft spot for pretty much anything Australian (of which more later) the grimy side of Sydney was too much at times. It wasn't until the third episode that a male character emerged with any redeeming features whatsoever. But it was a brave and ambitious series marked out with some complex character twists. 7/10.

The Code (ABC- iPlayer) - we watched two series of this pacy and high octane Australian thriller, pretty much one after the other. Taught and anxious due to stand-out performance of Ashley Zukerman as Jesse, a high functioning autistic lead character. I loved how it spanned different parts of Australian life, the outback as well as the stiff political class of Canberra. 8/10.

Hinterland (S4C) - we were properly gripped by Hinterland, picking up on where I left off from the first series which I reviewed here. I adored the sparse and oppressive central character in the show, the one consistent and dominant element that loomed not just in each episode, but every scene. That is the landscape of Ceredigion, and collectively the people of west Wales. I was disappointed that Sian and Lloyd weren't bigger parts, but the priority had to be flushing out the frankly ludicrous presence of the most useless copper on television, the brooding Prosser. We liked it so much we went to Aberystwyth for the day. 8/10.

The Handmaids Tale (C4) - I thought this was a masterful piece of filmmaking. Atmospheric, uncomfortable and terrifying. As part of an Elisabeth Moss binge it was right up there. But. There was a but coming. The experience of watching it every Sunday night, with adverts, was hard going. I'm delighted there's a next series, but I'm going to dash off the lot in a weekend. 5/10 for the experience, 8/10 for the actual programme.

Broadchurch (ITV) - we were dubious about how ITV could keep the momentum going with Broadchurch. More red herrings than a trawler could catch off the Dorset coast, the third series was actually my favourite of the lot. So many issues got resolved, so many didn't. I can't think of a better cast female detective than Olivia Coleman as DI Miller. 8/10

The Missing (BBC) - we found this second series a really tough watch, and frustrating for the jumpy timelines, but it was mesmerising and truly worthy of a week off between episodes. Keeley Hawes and David Morrissey were outstanding as the parents of a missing daughter, while Tcheky Karyo as Julien Baptiste brilliantly portrayed the detective who takes an obsession to a new level. The producers are constantly in the driving seat with what they choose to reveal, prompting a whole industry of speculation. 8/10.

Line of Duty (BBC) - for tension, twists, manipulation and sheer brass balls I watched most of Line of Duty stood up. This was the BBC at its best and at most preposterous. The clues were littered all the way back through the previous series, and sometimes it stretched credibility with the deep and frankly inexplicable dark criminal conspiracy looming over everything. 9/10.

But the winner is...

Broken (BBC) -  as Catholics you sort of heave a sigh of predictable acceptance when a TV series focuses on a priest. It's usually only a matter of time before he gets outed as a kiddie fiddler. Dark as this series was though Sean Bean not only delivered a performance you could believe in, but depicted a priest that truly fulfils Pope Francis' call to them to get out and smell of the sheep. Tough storylines, full of despair, frustration and tension, but in doing so Jimmy McGovern also wrote a troubled love letter to the church. Full of contradictions, but full of the graces. 9/10.

Posted by Michael Taylor at 8:18 pm