Clash of the abominable owners - Rovers at the Ricoh 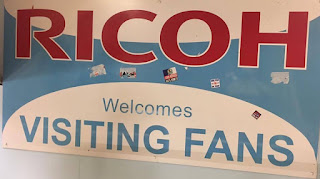 Two clubs with abominable owners met last night at the Ricoh Arena. My team the Blackburn Indian Chicken and Pharma Conglomerate visiting the Japanese Photocopier Bowl, the temporary home of of the Coventry Hedge Funders in the Confected Energy Brand Trophy. That Blackburn won the actual cup tie 3-1 doesn't settle the argument of who have the worst owners (not that they were there, either). You can take a look at many others here to decide that for yourself.

It is an appalling situation that Coventry find themselves in. Kicking off the season in League Two (fourth division) is no place for a club of this size in a city like Coventry. Reading back through the coverage of their shabby period in charge provokes real anger. SISU thought they could turn around a distressed situation to their advantage, wreaking havoc on the fortunes of the club, the city and the asset they thought they'd enhance. Instead they've made it worse, arguably by applying their own ruthless business logic to a sport that defies it.

In one of our Discuss Manchester debates a few years ago my pal Graeme Hawley (currently on the silver screen as Morrissey's teacher in England is Mine) made the powerful and emotional case for fans everywhere. An unregulated wild west has enabled football to become the plaything of oligarchs and asset strippers. A club is no longer a focal point in a community that exists for the common good. 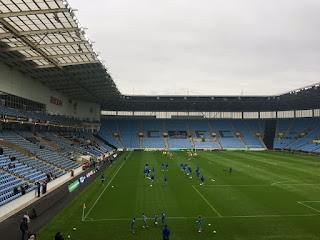 On looking out across this large bowl of a stadium last night my first sad thought was how sparse and eerie it was. How a few thousand people peppered around it accentuated the demise of what it ought to be. I texted Graeme to say I thought it felt like a music venue, an arena with a pitch in the middle, compounded possibly by a very good choice of music. The effect of that size and scale, that emptiness, has proved suffocating to teams, he said.

On my groundhopping journey, of which this season will be a very busy one, this is another new ground chalked off. I make it the 149th ground I've watched football on, I'm now on 79 out of the Punk 92 as I'd seen Coventry City at Highfield Road twice before, but it is my 71st of the current 92 as I lost Hartlepool United and Leyton Orient last season, the latter another club with bad owners.

I was pleased that we won, especially after the disappointment of Southend, but never have I felt as sad at a football ground for the fate of the fans following the other team.
Posted by Michael Taylor at 1:39 pm