A win at Bradford, that's more like it Rovers. Better in every way 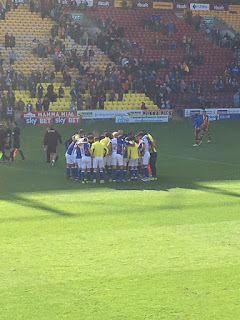 The contrast with last week couldn't have been greater. Yesterday at Valley Parade, Blackburn Rovers ended the home side's unbeaten home record with a good win. Not emphatic, not dominant, not even lucky. Just good.

But I didn't just enjoy the day because we won. I was taken with the manner of it. All of the things that appalled me about the performances at Southend and at home to Doncaster were gone. The play was positive, Conway got some good crosses in. I liked Dack playing just off Samuel and thought they were both a handful.

There are still errors lurking, but this is the third tier of professional football.

I can't be bothered analysing the opposition any more. There's enough going on with my team to take in. But there were enough slack passes and mistimed tackles by Bradford to suggest they just had one of those days where they couldn't click. Overhearing a few of their fans after the game confirmed this. But fair play to Evans, Smallwood, Bennett and Dack for being first to those loose balls.

I've not been to Valley Parade for a long time, nearly 30 years, it's a striking ground that seems unfinished. If we'd planned our day better we should have paid tribute to the memorial in the city centre and at the stadium to the 56 who died in the fire in 1985. Instead, after we got off the train we found ourselves being escorted to the stadium by a testy police presence. Rubbing shoulders with the Blackburn leg of the EDL was a thoroughly unpleasant experience and one not to be repeated. Memo to self: if you hear the sound of a football crowd in a city centre, don't go towards it, go the other way.
Posted by Michael Taylor at 12:28 pm

You have my sympathy being caught up in that Police operation, just what intelligence report had prompted that level of Police numbers?
I know some of our fans are well less than perfect, and that's being kind, but it seemed a total over reaction. Fans treated like animals?
You were in it Michael, perhaps there was a reason for it?

I'm 70yrs old, an Army Veteran, and get body searched going into an way grounds. WTF?

About the game, totally agree with your comments. Plenty of room for improvement yet, need to get psychological approach to games at this level correct. Critical.

Cheers Peter. I thought the cops were alright to be fair. There were about 100 in that escort. I'd describe about 10 as complete racist hooligans, 20 as impressionable gobshites, the rest a mixture of kids and people who just got caught up in Wetherspoons and maybe liked a sing song. And me and my two sons. God knows why we thought it would be a good idea to walk to the ground with them. I thought it might be a looser escort, rather than being kettled like that. But there were pockets of Bradford people - not necessarily footballs fans who were then drawn to the parade and sparked off a couple of confrontations. Would that have happened if they'd just walked to the stadium from the pub? Maybe they'd have assaulted small groups of Asian lads on the way. The local police were right to protect the public from that.
For the searches, the cops are looking for pyro and bottles. You are right that profiling is way off, just no need to put people through it.
Hope our next away trip is more straightforward, but absolutely right about the mentality of the team, need to be ruthless, cynical and dedicated to winning games of football. Ugly if necessary.

A Bradford fan I know accused us of being cynical; not from what I saw on the extended highlights. At least we looked up for it!

Think the Bradford fans had become complacent at home too; no divine rights to 3 points in any league, especially League One!