Freshwalks is for dogs - even eccentric ones like ours 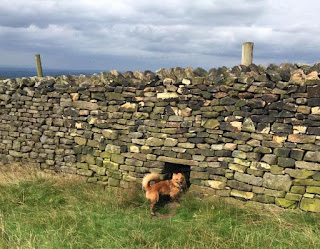 Rachel and I went on the latest Freshwalks yomp through and around Lyme Park on Friday. It was a truly great day, as these occasions always are, covering 9 miles, 21,128 steps and a climb up the equivalent of 76 floors.

We also took our trusty border terrier, Martha, who we thought would enjoy the challenge and the exercise and being around other people. As this is National Dog Day, it's high time this blog paid tribute to our eighth family member. I didn't expect us to be joined by six other four legged friends on the day. It has to be said, our Martha doesn't like other animals. We can be relaxing in the back garden or conservatory and she goes completely doolally at the smell of a cat, squirrel or a pigeon. She is particularly offended by squirrels. Hates them. And she will never get near one, ever. But she retains her greatest outrage for other dogs, the nearer to home, the angrier she is. When we walk her up the hill from our house she's literally straining at the leash in a demented rage if there's another dog on our road. Not without justification she's earned the nickname "Millwall" for her readiness to "have it" with any dogs trying to take serious liberties on her "manor".

Around people she's absolutely fine. She'll roll on her back and invite anyone to stroke and tickle and she's remarkably affectionate with little kids. 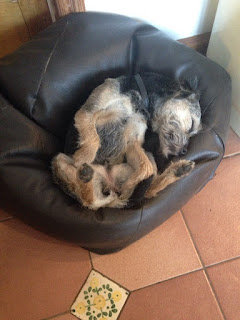 Her transition from border terrier to border terrorist can be traced back to when she was a puppy and she bounded up to a Rottwelier being barely controlled by a skinny woman in high heels and "WAG" sunglasses who screamed at us, making the situation even worse. She's never been the same since. Our only other major concern was when she escaped from our cottage in the Lake District and chased sheep (and caravans). I have palpitations thinking about it now, relieved none of my kids were far sighted enough to capture the moment and my anxiety for YouTube. Put it this way, Fenton wouldn't be the name guaranteed to get a cheap laugh whenever a dog is chased if they had.

Here's the thing though. She managed not to have any fights yesterday. A bit of casual gnashing to start with, but she got used to it and behaved herself. Even shrugging off an attempt to be mounted by a lively bull terrier. My favourite of the other dogs on the trip was Fox, pictured above, a gorgeous and totally eccentric character who did a lap of honour around the Ram's Head at the end of the walk. All that was missing was a chef in full whites chasing this curious half Jack Russell/half Collie out of the kitchen while he scamped off with a string of sausages hanging from his mouth and that tail wagging furiously. And our Martha slept ever so well.
Posted by Michael Taylor at 7:27 pm