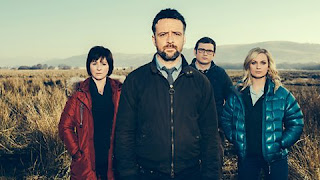 I haven't found the time to lose myself in Nordic noir, though I have little doubt that I'd like it. The closest I've got has been the raw and aching melancholy of Hinterland, the Welsh contribution to this particular televisual challenge.

The bilingual BBC Wales version appeared on iPlayer last week and I have just binge watched the second series over the weekend. As has been widely reported, the series is shot in both the Welsh and English languages. Even though we don't learn too much of the professional career story of the central character of detective Tom Mathias, played by Richard Harrington, in this hybrid version he doesn't speak any Welsh but his colleagues do when he's not around and to members of the public. I'd have felt let down if it had all been English.

The light, the tone, and the landscape make it an unforgettable and distinctive visual spectacle, like absolutely nothing else on British TV. The understated brooding intensity of the characters hint at new layers of mystery and the bitter hurt of a hard life. The particular pain of Mathias as he battles demons and unbearable pressure make it a sometimes unsettling viewing experience, but his flaws are far outweighed by his powerful moral instincts and the sometimes extraordinary lengths he goes to in order to champion the bullied, the excluded and the victims.

Every character reveals more of themselves as the episodes roll on. The detectives Elis and Owens with their recent losses, community ties and hints at minor complications of growing up in the community you serve and protect offer more as we go on. And it is a drama about how police people proceed with life, not a police procedural drama. I don't think I've seen anyone being arrested, just questioned. Using the scarce time to get to the point of the drama, the conflict, the clash and the pressure points.

There are deficiencies. Anytime the police go to interview someone in a murder case, if the relative, neighbour, or witness, carries on insolently doing their work, they've usually got something to hide. It's something I first noticed in Broadchurch, but partly due to the prevalence of dirty industrial trades it's even more in your face in the harsh demanding terrain of west Wales.

Is there a more unhelpful chief of police than CS Prosser, the most senior copper in Aberystwyth? Embedded almost certainly corruptly in his community he offers no insights, just warnings. Everything is conditional, but what does he actually do except stare out of a window and narrow his eyes?

There's also a recurring character in the second series called Euan Thomas, who I have completely forgotten about. He was in the first episode, but I can't recall him. That can't be right. It's possibly a symptom of the tightness, the closeness of the whole enterprise that it is hung together by a master plan, it will come together again. But while this may stand the test of time and make for an impressive body of work to be consumed in one weekend, I'm going back more than a year and I'm too old and busy to retain detail.

But that's not vital, not really. This is an ambitious production made for the people of forgotten rural Wales. And it is the people and their stories who provide the living backdrop to Hinterland that make it so unique and special. Blokes struggling to keep a bus company going, boatbuilders, farmers, mechanics. Often working amidst struggle and grime with broken down machinery, cracked Windows and peeling paint. These are the people who are often invisible from literature and television, but here they are presented in a way that understands them, without patronising or by passing comment.

This is a brave and demanding piece of television that promises more and hints at a journey to a place you aren't really sure you want to go to.
Posted by Michael Taylor at 9:23 am