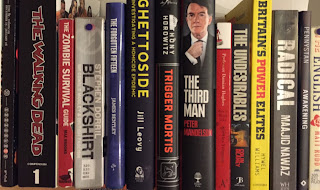 This is the current reading pile. A fair old mix of politics, sociology, power, football and religion. Apart from the Tintin collection, I've not looked at many graphics novels, but the Walking Dead has become a ripe old obsession.

Two of the pile are library books which are due back - the book on the English which I needed for a chapter I was writing for a forthcoming collection. The other is Stephen Dorrill's incredibly detailed history of British fascism, which has been fascinating and rich in direct accounts.

I've got slightly more than a passing interest in three of the books here. My friend Richard Pennystan has produced a deeply personal account of his relationship with God. As an Anglican vicar he also has a few things to say about "hollow religion" which I enjoyed discussing with him at the launch. James Bentley has written about Bury's 1984-1985 team in the Forgotten Fifteen and I was proud to be asked to contribute some observations. I've read Peter Mandelson's The Third Man before, but this is a copy he gave me and signed. Now that we're working together at Manchester Metropolitan University it's good to be familiar with his stories and experiences and to have that to hand.

Tucked in there is the bumper edition of Monocle, the world's greatest magazine. Still setting the pace.

I'll let you know how I get on with these and hope to finish them all, but as ever I've got distracted by a late entrant, this time it's Free Agent by Jeremy Duns.