Rain stops play in Wales - not an entirely wasted day 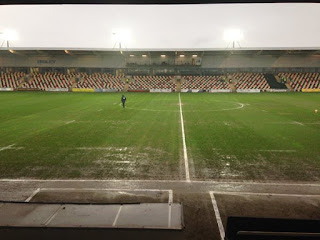 It was meant to be ground number 69 out of the current 92 on my quest to visit every ground. It would have been the 142nd stadium in which I'd watched competitive senior football.

But it rained in Newport. It rained and rained and rained. And then it rained so much that with just 45 minutes to go before kick off (picture above from the Lancs Telegraph). We didn't even get chance to look around at the ground, its aesthetics, the layout of the stadium. No, we weren't able to do any of that as it was just chucking it down. Don't even know if we'll get refund on the tickets. There is no chance of getting down for the re-arranged date, unless it gets kicked along the road until the next available Saturday.

But to be reflective for a moment, it wasn't an entirely wasted day. I spent the day with my Rovers supporting sons. I wrote about the importance of this in this piece for Sabotage Times here. We played cards on the train, we had lunch in their favourite chicken shop and I caught up with a couple of pals on the train down there who I hadn't seen for a while.  But it was a lot of money and a lot of time to spend for a Nando's. We thought about doing something else with our day in Newport, but opted to jump on the first train home instead and enjoy an evening at home with the other people we love.
Posted by Michael Taylor at 3:44 pm