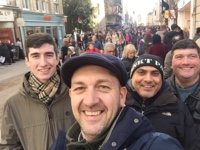 Sometimes it can be better to travel than to arrive.

Dressed as I was for a hike up the north face of the Eiger, the Cross Country train to Oxford was crowded, hot and claustrophobic. The bus trip along Cowley Road to the Kassam Stadium was tortuous and slow. Same after the match and so we missed our direct train home, the bonus being a pit stop at the awesome Birmingham New Street station. Truly jaw dropping to have transformed a space that was once, and so recently, so ugly.

None of that matters though. Hooking up with a couple of pals, me and Louis had a delicious Indo-Chinese lunch at the Banana Tree, another of these well executed mini-chains themed restaurants that burst out of London at a fair old rate, and a mooch around Oxford. Bustling, prosperous and steeped in history we enjoyed our amble. We laughed as we crawled along Cowley Road, the student strip, where David Cameron once lived and we spotted a bar called The Bullingdon, though not one called the Roasted Hog.

And the match was great. We've hailed far too many false dawns over the last few years, but this was a high, because the expectations were so low. 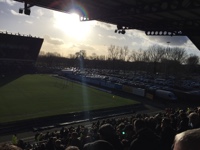 The full house of Cup Giant Killing Cliche Bingo was lit up. Ex manager Michael Appleton in Oxford's dugout, alongside him Rovers legend Derek Fazackerley, low morale at Rovers, the loss of Jordan Rhodes, a team full of new faces. What could possibly go right? 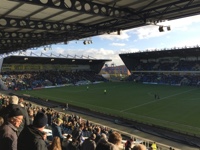 To be fair, it all did. Of the new faces Tony Watt will be pleased with a debut goal. Simeon Jackson was a handful for the home defence all afternoon. But for me Elliot Ward stood out as the strongest starter. Solid, commanding and intelligent. All the attributes we lack in abundance.

It's always an added pleasure to watch football in a full stadium. Full in the sense that all three stands were fully occupied, odd in that one end isn't finished ("shall we build a stand for you?"). 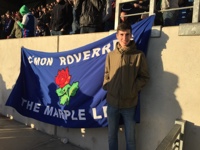 Another of the official 92 notched up, reinstating Oxford makes it ground number 69 and the 142nd stadium I've watched football on. Hoping for Shrewsbury or Peterborough away in the next round.
Posted by Michael Taylor at 8:06 pm