Boro away, days like these are ones to savour 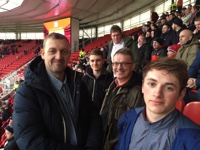 Wow. What a difference. Against the team at the top, who just stole our top scorer, I have to say we bossed that game.

1-1 was a good point for Middlesbrough because frankly Rovers deserved to win. Jordi Gomez is the player we've missed all season. Tony Watt is more tenacious than Jordan Rhodes. Saw a decent shift from Cory Evans and Tommy Spurr too.

With ten minutes to go the line of defence was on the half way line. Pushing, pressing and looking forward. Even when we beat Preston in Paul Lambert's first game in charge we desperately parked the bus. Not today. We could have and should have won. If those late loose balls had fallen to anyone but Hope Akpan or Elliot Bennett it would have been in the back of the net.

In town pre-match it's clear this set of fans think they are a team on the up. And all around us as we stood in the home end agonising as we disguised our amusement at such an excellent performance, the home fans grew more frustrated. They may still go up, fair play to them if they do, because as a group of fans they are supportive to the end.

But not on this evidence. I thought David Nugent is so similar to Rhodes it's a mystery why they spent so much on him. And what an insult to him to be introduced as "Jason Rhodes". You had one job, Mr Announcer.

But days like today are about so much more than 90 minutes of football. Lunch and a tour of the town with an old mate, meeting his son, stories, nostalgia, memories and hopes for our families and their bright futures. That is if we survive the heart attacks induced by a Parmo, the Middlesbrough signature dish of a chicken escalope smothered in cheese.

I rather think I've tortured my lads Louis and Joe by taking them to an away game and standing in the heart of the home end. Promise we won't do it again lads. Certainly not at Burnley.
Posted by Michael Taylor at 6:12 pm

Nice of Jordan Rhodes to meet that young fan who was devastated by his exit. More than some other players who have left Rovers would have done.