No false modesty - I'm dead chuffed this blog is a finalist 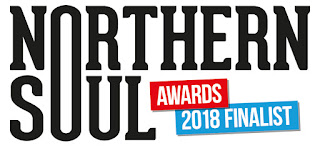 I'm not going to lie. I'm not going to claim false modesty. Nor am I going to say it's a team effort, because writing never is. But what I will say is this - I'm chuffed to bits to be a finalist in the Northern Soul Awards 2018 - writer of the year category.

I've never thought of myself as a 'former journalist' since I stopped formally editing a magazine in 2012. Since then I've written for loads of websites with a wide hinterland. I've written for the UK's largest circulation business magazine, Economia. I contribute to Met Magazine at Manchester Metropolitan University. In the last two issues I've contributed the type of feature I like best - the set piece sit-down interview. One was with Greater Manchester's Mayor, Andy Burnham. The other was with the man who did more than anyone else to create the powerbase Burnham now wields, Sir Howard Bernstein. There's one with another northern politician in the next one.

I also write speeches for other people. There is something incredibly satisfying when I hear someone else's voice relaying words I've written for them. There's an example here and another here. Having been to hear two of my favourite writers this week, I would dearly like to have another crack at long form writing again.

But it was for this wee blog that I entered the award. A mixture of obituaries, grumbles about trains and politics, TV reviews, and melancholic tales of football and fatherhood. And not being diagnosed with bowel cancer. I don't blog as much as I did in the pre-Twitter era, but I have been at it now for 12 years. I love having the outlet and the platform and I enjoy getting messages from visitors from all over the world. So to be able to fly the finalist flag on here is a great lift.

I've also realised how much I enjoy reading Northern Soul, the organiser of the awards. Helen Nugent has done a brilliant job curating a hub of culture and northern life. So, please support her enterprise, wish me luck and I hope you continue to enjoy visiting the Marple Leaf blog.
Posted by Marpleleaf at 2:44 pm

Congrats on the nomination, great work.

However, and I am very sorry to be a pedant, but Economia, significant as it may be, isn't the UK's largest circulation business magazine.

That privilege goes to First Voice, the member magazine of the Federation of Small Businesses at something around 175,000. One of ours as it happens.

Actually, I'm not all that sorry I'm a pedant, as you know. Anyway, I hope all is well.