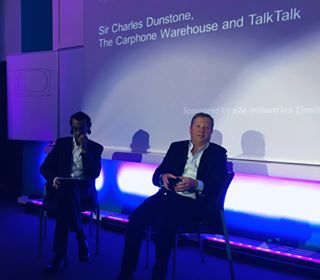 One of Britain's leading entrepreneurs was in town last night. Sir Charles Dunstone captivated an audience of business school students with his well told story of risk taking and innovation. Here are ten things I learnt from Charles' talk.

He's looking very well - I interviewed him at the University of Liverpool in 2012, here, and I have to say he's dropped a lot weight and is looking trim.

He owns Five Guys - I should have known, but possibly forgot, that he owns half of Five Guys in the UK. I love Five Guys. I think the food is a real treat, delicious customised burgers and probably the best fries there are. I don't disagree when Charles described it as an amazing business, even though it's remarkably simple. I was taken with his summary of the business model - it's bright, the music is too loud to be comfortable, they don't sell coffee and they don't have wifi. Basically you eat up and leave. One is opening near work soon, I need to take a lead from Charles and not go there too much.

Six guys - the perfect business has six people in it. For every employee you then add the productivity of the others goes down.

Avoid going public - it shouldn't be an ambition and it caused him great headaches having to deal with the City and the institutional shareholders.

He doesn't like HR - he described it as a poison. All good businesses don't have it he says. His reasoning is that it confuses people at work about who they work for and it confuses managers about their relationship with the people who work for them. "It grows like a tapeworm inside you," he said.

He won't come to your leaving do - he's never been to any leaving do and has never had one for himself. When he's done, he's done, and so should you be.

The most common mistake in business -  you set up, get going, realise you don't know what you're doing, so you hire experts who you assume know what they're doing and they screw your business up. He used an example of that going spectacularly badly at Carphone Warehouse when a group of supermarket buyers came in and started treating Nokia and Vodafone in the way they used to bully strawberry farmers.

Big companies kill innovation - he hated being chair of Dixons Carphone Warehouse when it got so big. 48,000 people is too many people and the edge has gone, he said. People spend so much time working to avoid doing something wrong that they never have the time to do something right. Every successful internet business was a recent start-up. That's where innovation is coming from, nothing new and revolutionary has emerged from a big company.

Apple is heading for the sunset.  - I asked him what insights he had of Apple, and whether they were the exception to the rule about big companies losing their agility. He answered by pointing out that they haven't come up with a revolutionary new product since Steve Jobs died. They are squeezing every last drop out of their hardware business. Tim Cook is the Steve Balmer of Apple, a product marketing guy, not an innovator.

Ethics is ever more important in business - he drew a diagram and asked us to imagine a rectangle, inside that is everything that's legal to do in business. Inside that is a circle inside which is everything that is ethical. Between the two are things like drug companies selling opiods. It's legal, but they shouldn't do it. I had the fashion industry in my mind at the time and the environmental damage cheap cotton is having. And how our children's clothing is so cheap because other people's children are making it in Bangladesh, and no-one seems to care. That was the question I didn't ask.

This was part of the Entrepreneur series produced by the Manchester Enterprise Centre at the University of Manchester and supported by A2E. Vikas Shah was asking the questions and elegantly leading the Q&A. Next event is with Wayne Hemingway on Tuesday the 27th of November at the Alliance Manchester Business School.
Posted by Marpleleaf at 11:18 am