Muscle and the menace of Craig Fairbrass 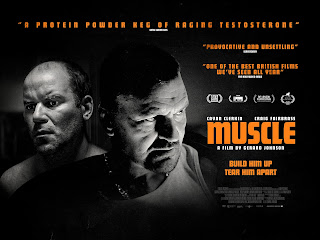 A few years ago (here) I made a confession that my guilty pleasure was British gangster films. Not just the good ones, but the rank bad ones too. The good ones are really very good and stand on their own as great British dramatic films, irrespective of the criminal content - Long Good Friday, Get Carter, Layer Cake, in particular, because they help us to understand Britain in a time and place, as well as being compelling stories; far more than the Lock Stock geezer flicks of the 1990s. But it’s the straight-to-DVD, formulaic, sweaty, expletive-laden, violent, ludicrous and overblown films of the burgeoning genre that fascinate me. The Rise of the Footsoldier franchise is now at stage five, and I am genuinely looking forward to seeing how Craig Fairbrass rinses the story of the Essex Range Rover murders even more, in his muscular menacing portrayal of Pat Tate, by all accounts a horrible bully undeserving of his cult status.

There’s a great piece from the Guardian in 2015 here that gives some insight into the economics of these films, popular with a male demographic. I’d be fascinated to see the data behind the algorithm-driven commissioning of Netflix and Prime Video, because even with declining DVD sales there still seems to be an active market for more of this stuff.

But the one constant that makes many otherwise dire films compelling and edgy is the presence of Craig Fairbrass, who is also fiercely aware of his own persona and how he’s become the go-to big guy. I’m thinking here of two films centred on errant brothers with Fairbrass as the bigger scarier sibling, Villain and Avengement. He not only looks the part, whenever he's cast in roles like these but knows how to act.

Yes, the point of this preamble is a proper and deserving tribute to the under-appreciated and possibly underrated talent of Craig Fairbrass. It's time to say this because of one of the most unsettling and atmospheric films I’ve seen in a long while. Gerard Johnson’s Muscle is a gruelling deep dive into the crisis in masculinity, with Cavan Clerkin’s central character of Simon drawn in by the intimidating charisma of Fairbrass’s Terry, who he meets down at the gym. Things escalate badly, and never reach a satisfactory or obvious conclusion. The high point is the claustrophobic menace that Fairbrass brings to every scene he’s in. You can’t just do that by direction and set design, but by proper acting.

And that’s my way of saying, by the way, that Muscle is very stylishly directed and designed by Gerard Johnson, gifted the support of his brother Matt from the band The The, and their mesmerising contribution to the score of the song I WANT 2 B U. Gerard Johnson's previous film Hyena was grim, effectively and deliberately, but by shooting Muscle in black and white he took it up a notch. Shifting the action to Newcastle, it also included a cast of extras that looked so authentically seedy you could practically smell them.

As for the rest of the genre, I genuinely don't want the conveyer belt of geezers and grafters to ever stop. I want more Footsoldiers, follow-ups to The Business, I want JJ Connolly's Viva La Madness, I want gangs, drugs, hitmen, geezers and old lags still doing it the old way. But after Muscle I think what I really want is Craig Fairbrass to get a few more breaks and directors to take risks to get the very best out of a fine acting talent and lift this genre to greater creative heights.

Posted by Michael Taylor at 8:30 pm