Back to live, back to reality - Richard Hawley at the Piece Hall in Halifax 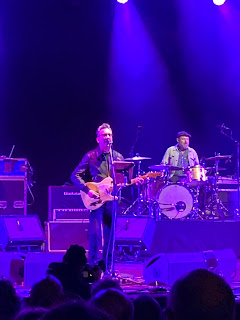 We're all supposed to be reminding ourselves what it feels like to be normal and human again. You will no doubt be reading blogs and news pieces about the return to the office, about how town centre retail is busy again, and how we're experiencing different social spaces.

Last weekend we went to our first live concert since forever. I had to pause and think when the last gig was, and I genuinely can't be arsed to look it up, to be honest, but it was in 2019. I feel now, more than ever, that I was sleepwalking through life. I was passing opportunities by, saying no to things that we would enjoy, missing out on good times with friends that I so easily thought could be put off until another day. I think we've all been reminded there might well not be another day. Something else could so easily come along and strip us of all these opportunities to be human.

Let's get the obvious out of the way first. We saw Richard Hawley and John Grant at the Piece Hall in Halifax, a gorgeous open space that on a warm late summer evening felt like a Tuscan hill fort. You couldn't have asked for a better setting. I watched the whole operation unfolding around us, the people putting the stage together, the musicians, the people selling stuff, and just could have wept for how uncertain their life has been over the last two years, being unable to do what they do so well. The audience, for the most part (more later) were nice middle aged people experiencing, like us, that first tentative step into the reset of reality, of life as it's meant to be lived, not cooped up at home.

We missed Stephen Fretwell (my fault), but John Grant was as emotionally raw and beautifully honest as I would have expected. Richard Hawley too, cool, effortless, humble. He was just viscerally, creatively brilliant. I could honestly not have scripted a better return to the live experience. I think he checked himself before he burst into Tonight the Streets Are Ours and spotted the profound relevance of what he was about to sing to us all:

Do you know why you got feelings in your heart?

What you see sets you apart

And there's nothing here to bind you

It's no way for life to start

The writer Eamonn Forde has come up with some good suggestions for new rules about live music on the Music Business Worldwide website. It's a good indication of how we're all going to have to ease into this new reality. I dare say New Order this Friday at Heaton Park will be a bit different.

There was a guy standing near us who clearly enjoyed being back. He looked like a nice bloke who would no doubt enliven any party, especially with a couple of beers in him, and maybe I was forgiving of him because he looked a bit like the Blackburn Rovers player Bradley Dack. All the way through John Grant, and then Richard Hawley, he cackled away, roaring with laughter and taking up a lot of space, entertaining his friends with jokes and quips. After about an hour into Hawley's set I spotted that another bloke's patience had snapped. He had Dacky by the lapels and was telling him in no uncertain terms to dial it down. After that, an awkward stillness descended. I felt a bit sorry for him as he smiled at his friends, who also looked a bit sheepish at having contributed to the buzz, but saw Mr Centre of Attention had copped for a dressing down. At the same time, I was pleased that someone (not me) was prepared to police the boundaries of behaviour with nothing more than a bit of verbals.

We're stepping into new terrain; life feels brittle enough as it is. I hope we manage to hold it all together as best we can, to be tolerant, considerate and happy.

Posted by Marpleleaf at 7:47 am