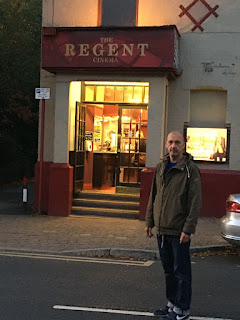 One of our particular local Marple treasures is the Regent Cinema. Since it reopened we've made an effort to go as much as we can. It first operated as a cinema in 1931, and I for one will do everything I can to see it celebrate its centenary.

I hadn't appreciated that the operator of the cinema, David Lillis, had been doing so uninterrupted for 52 years. It is a wonderful, comfortable, time-shifting experience. I learned from the website that since April 2020, David decided to retire from the managerial position and handed the baton over to Edwin Gnanaprkasam. Before taking over as the managing director, Edwin had been learning about the business and assisting David Lillis in the cinema for 5 years since 2014. During this time, he developed an enthusiasm to carry on the legacy. He's doing a great job.

It so deserves your support and totally has ours.

This is at a time when some aspects of the modern leisure industry seem to be pricing themselves in a whole new category of chiselling and money-grubbing. Chief culprits are Center Parcs, festivals and cinema chains.  You know that it's true when observational comedians are all over the larceny that is pick and mix, popcorn or hot dog prices.

Forgive me then that I get giddy with joy when I buy a perfectly manageable carton of popcorn for a quid at the Regent, and some M&Ms and a can of pop for the same, after parting with no more than a fiver to see a film. Stopping the film in the middle to serve ice cream is also the most civilised thing you can do, just ahead of only charging a quid for a choc ice or a wee tub.

The Guardian did a review of the Regent in 2013 which captures the place very well, that it still feels so welcoming and has the same reliable lovable quirks is a great testimony to how Edwin is doing under David's guidance. But equally, I love too that they've embraced online booking now.

There's a certain type of film that seems very appropriate to the whole experience and target demographic of the place and I reckon "Peak Regent" would be The Best Exotic Marigold Hotel. Whenever we see a trailer for a film featuring any of the cast from that - Celia Imrie, Bill Nighy, Ronald Pickup, Maggie Smith, Tom Wilkinson, Dev Patel - we just say, "that'll be on at the Regent".

It's like an extension of the Six Degrees of Kevin Bacon game. The closer you get to members of that cast, the more likely it's a Regent type film.

The last two films we saw there were the Cold War epic The Courier, starring Benedict Cumberbatch, then The Last Bus with Timothy Spall. Both were very, very strong central performances. The Last Bus lost its way with some overdone hammy cliches which even The Guardian thought was overblown woke.

But do you know what? I don't care. I've long been of the view that not every book and film or record has to be amazing to be appreciated, sometimes it makes you just think about the process, the integrity, the compromises, the ways in which an artist can learn from one piece of art and make the next one even better, and improve your own critical faculties when you next see something brilliant.