Always judge a magazine by its cover 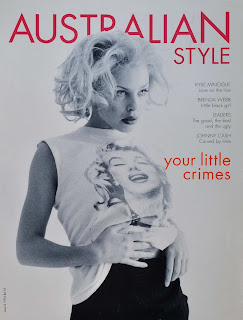 I'm still a sucker for a new magazine, not just as a reader, but as someone who's been into the whole process all of my working life. I love to pick up something I've never seen before and thumb through it, check out the advertisers, think about the production meetings that led to the different design decisions that were made. I always ask, who it is for? And wonder if there are enough of them to sustain it.

A few new titles I've liked recently have included a trendy business magazine called Courier, which feels a bit like Monocle. A men's fashion concept aimed at old hooligans like me, Paninaro. The design style is striking and it has a real clear personality and a curiosity about it. The interview with JJ Connolly in issue 002 is very good indeed. I really liked Faith magazine, a freebie about clubs and house music that was packed with really good interviews and recollections. I've not sat down to read my latest purchase, but it's a niche wee project called Turnstiles, produced by a Blackburn Rovers fan, Chris O'Keefe.

The most important page in any magazine is the cover. It's the one that I would think about first and last whenever I was the editor, and planning ahead or thinking through the bigger message any title needed to say. The first magazine I edited I worked with the fantastically talented Andrea Horwood, who went on to build Australian Style magazine. She was a fabulous stylist and I bowed to her judgement on her choice of interesting looking cover models. I've just found a print of a cover featuring Kylie from 1994 that's on sale at an auction for A$1200, which rather proves the point.

When I worked in the UK Britfilm magazine sector in the 1990s we were spoilt for choices of imagery, given the subject matter, but I tended towards something with an eye-catching visual effects story to draw the eye to the cover lines. Or something from a TV series I liked, such as Cold Feet.

At Insider I was much more interested in conceptual stories and created some great covers with designer Damien Wiehl. I think of only a handful of single personality led covers, I just don’t think anyone in the regional business community could justify that kind of rock star status. In my office now I still have the framed print of the cover from 2007 bearing my award-winning story of the collapse of retailer Music Zone. For me it has everything, it's brash, it's about the story, it projects it accurately and it's remarkably simple. 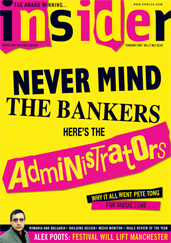 All of this is pointing towards a trip to Rare Mags in Stockport's Underbanks, a delightful shop with a love of design and print that still gets me excited.

Posted by Marpleleaf at 7:35 pm