Radcliffe to Wembley, next stop Mossley 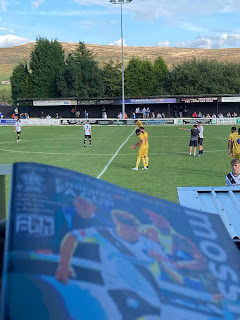 I don't think there's a prettier view in all of football than the setting of Seel Park, Mossley.

I was there for the Second Qualifying Round of the FA Cup today, to see Radcliffe again, and for a second time they ended up comfortably overcoming opposition from a lower division, this time it was Mossley from the Northern Premier League West Division.

It was a good crowd on today as well, taking advantage of another extension to our summer, drinking pints in the sun and enjoying a decent game. A good following from Radcliffe swelled the attendance too, with both teams really up for a cup run and all that it brings to a shoestring operation like this.

I had a good chat to my pal Alan Townley before the game, a Radcliffe director, who filled me in on some of the team news. The story of Kole Hall, Radcliffe's wide attacking star fascinated me. In June he played for Bermuda in a World Cup qualifier in Florida against the Cayman Islands. He was one of a number of Radcliffe's young team that look like they could play at a higher level. The winning goalscorer Andrew Owens gets himself into good positions and the two centre backs - Olly Thornley and Joe Cummings - look assured.

The score was 2-1 and although the home side took the lead in the first half, played with real guts and spirit, in the end, the division of difference between the sides started to look obvious.

I don't have any skin in this game, I'm not supporting one team over another. As much as I enjoyed another trip to beautiful Seel Park, all I hope for in the next round is somewhere interesting to go with Radcliffe's ball in the velvet bag for Monday's draw.

Posted by Marpleleaf at 5:11 pm