The 143 greatest songs, one per artist, a partial and personal list 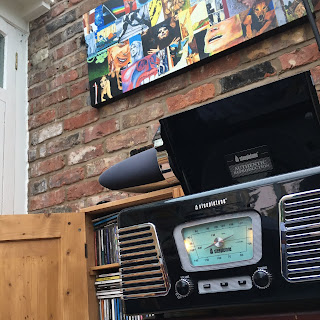 What is it with blokes and lists, eh? A few years ago I hit on the crazy idea of putting together a list of my top 100 songs, with the rule that you can only have one per artist, the 2017 version is here, and the first attempt in 2011 is here.

Spotify has given us the means to create and curate lists to our heart's content. On my Spotify, which I now spend an enormous amount of time on, there are lists galore. You can link to those here, and I'm leaving everything open for people to copy and share. But not collaborate, I can't let go. You'll also find every episode playlist for our Music Therapy radio show on Tameside Radio, if you ever wanted to get easy access to the songs. They're not always the right versions though, especially as I have a proper DJ as a partner on this project, who has a superpower for finding rare grooves and hidden gems.

The 100 seemed inadequate. Especially as I discovered I can't count and that there were 112 songs on the 2017 version.

As if by magic, I stumbled upon the 143, a music blog curated by Andrew Collins, the former editor of Q and a prolific writer. He's utilised the same formula where you can pick just one song per artist. He started at 50, but it was a definitive, heroic, primal list of songs that were massively important to him. He kept going and stuck at 143. Where Andrew absolutely excels is the commentary around each song. That's a really impressive project and as you'd expect from a music writer of his calibre, it's a work of real quality that I don't think I could match.

And just to be absolutely clear, again. These are memories, some are deeply personal, some are dedicated to lost friends, to broken hearts and to better times ahead, but all are in some way connected to the sheer raw power of music. Maybe I will, but this is enough for now.

All of my Heart, ABC

We Could Send Letters, Aztec Camera

A Day in the Life, The Beatles

The Day Before You Came, Blancmange

There's a Reason Why, Blossoms

Tinseltown In The Rain, The Blue Nile

Could you be loved, Bob Marley and the Wailers

Nobody Does It Better, Carly Simon

The British Way of Life, The Chords

Under the Milky Way Tonight, The Church

Straight to Hell, The Clash

Weather With You, Crowded House

There, There My Dear, Dexy's Midnight Runners

I Touch Myself, Divinyls

You Don't Have to Say You Me, Dusty Springfield

The Killing Moon, Echo and the Bunnymen

Getting Away With It, Electronic

Paid in Full, Eric B. and Rakim

Missing, Everything But the Girl

Lost in Music, The Fall

Love See No Colour, The Farm

Do You Realize?? The Flaming Lips

Welcome to the Pleasuredome, Frankie Goes to Hollywood

The Revolution Will Not Be Televised, Gil Scott-Heron

The Message, Grandmaster Flash and the Furious Five

The Revolution Will Not Be Televised, Gil Scott-Heron

Your Evening of Swing (has been Cancelled), Half Man Half Biscuit

Visions of You, Jah Wobble

When You're Young, The Jam

Rattlesnakes, Lloyd Cole and the Commotions

Fade into You, Mazzy Star

Time Of No Reply, Nick Drake

Into My Arms, Nick Cave

All Around the World, Oasis

If You Leave, Orchestral Manoeuvres In The Dark

Because the Night, Patti Smith

No Tears to Cry, Paul Weller

Purple Rain, Prince and the Revolution

Pretty In Pink, The Psychedelic Furs

Open up Your Arms, Ren Harvieu

Run for You, Richard Hawley

More Than This, Roxy Music

The Greatest Love of All, Kevin Rowland

The Spirit Of Radio, Rush

Over the Border, Saint Etienne

We are Family, Sister Sledge

Nothing Compares 2 U, Sinéad O'Connor

How Soon Is Now, The Smiths

I Got You Babe, Sonny and Cher

I Am The Resurrection, The Stone Roses

No More Heroes, The Stranglers

Give A Little Bit, Supertramp

It's My Life, Talk Talk

Song to the Siren, This Mortal Coil

Up Against the Wall, Tom Robinson Band

Story of the Blues, Wah

And A Bang On The Ear, The Waterboys

Baba O'Riley, The Who