Groundhopping at Radcliffe, a grand day out with Sam and Big Al 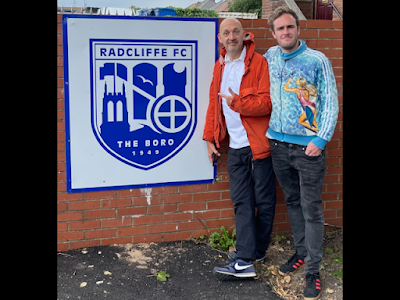 In 1977 my Dad gave me a football book that probably changed the way I feel about the game. Called Journey to Wembley, it's a story of the FA Cup, round by round, starting at Tividale in the West Midlands, and ending up at Wembley to witness Tommy Docherty's Manchester United denying Liverpool a historic treble, with the European Cup to follow just a few days later.

I can still remember reading about the grievances of locals in Tividale, annoyed that more cars than usual arrived to watch Geoff Hurst's Telford. The eye for detail, and the observation about everything else that goes on in and around a matchday, fascinated me and probably played a big part in pushing me in the direction of sociology and journalism. 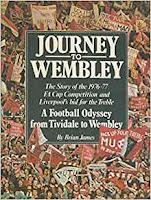 But I also remember asking my Dad how Brian James knew that starting this path in Tividale would lead to Wembley. I think he just smiled and suggested I work it out for myself.

On Saturday me and my friend Sam took advantage of the international break to start on our own Wembley trail at Radcliffe v Skelmersdale Town in the first qualifying round of the FA Cup. It was hastily arranged, we probably won't follow through to even the next round, but it's at least planted a few seeds for a daft idea.

We're both in 'say yes and try something new' mode, in pretty much every area of our lives. One of them was to try and see random sporting events and he fancied joining me on some groundhopping. We picked Radcliffe because I've never been before, so can tick it off the list as ground number 162, but also because our mate Alan "Man About" Townley is a director there and we thought we'd turn up and surprise him.

The game was pretty one-sided once Radcliffe got to grips with Skem's two best players. A late goal in each half was all the scoreboard says separated the two sides, but Radcliffe were good for the win, especially attacking downhill on the sloping pitch in the second period. The win, by the way, was worth £2,250 to Radcliffe, who now face a trip to Mossley in the next round on the 18th of September.

It's a quirky little ground with the only seating areas situated behind the goal and the pitch is on a bit of a gradient from one end to the other. We watched the first half between the dugouts, picking up what the coaches say, then watched the second half from behind the goal where Radcliffe kept up a constant attacking barrage for the final half an hour. Conveniently, we were next to the scoreboard, which Sam pointed out is better than the one at Old Trafford. When I go on my own I love listening to the characters and the comments of the fans, players and coaches at games like this. When I go with a friend it's a slightly different experience, taking it all in, but actually having time for a really lovely conversation with disparate micro dramas going on around us; kids jibbing in, security staff chucking them out, banter from the terraces, and of course seeing the raw frustration and occasional joy on the players' faces from such a close vantage point.

Thanks to top Tameside blogger Stuart Valentine there's a delightful absolute beginners guide to watching Greater Manchester non-league football here. It's a good reference to show me I'm only 5 grounds away from having every Greater Manchester ground at level 8 and above ticked off. Here's to more days like these, even though we might not get all the way to Wembley, or even Mossley. 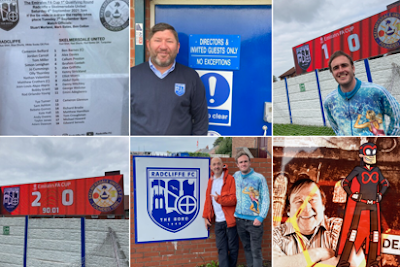 As an amusing postscript, when we got into Manchester afterwards for a mooch about, we found this mural at the back of the Printworks for the charity Forever Manchester, included on it is Captain Manchester, the good deed doing superhero character created by Sam, and next to him was the late Bernard Manning, who's son was chairman of Radcliffe until 2017.

Posted by Marpleleaf at 1:28 pm