More Mayors are coming, but what works and why? 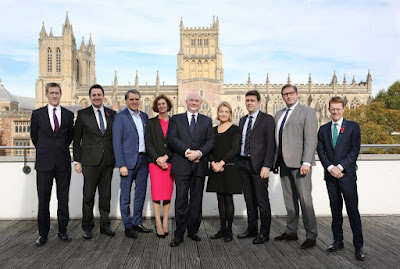 More Mayors are coming. In an interview with the Financial Times (£) yesterday, housing and local government secretary Robert Jenrick put the possibilities of city deals and devolution agreements back on the table.

I think we were a bit blindsided by Boris Johnson's levelling up speech in July. His delivery was unconvincing (well, it was a shambles, actually). Buried in it however was a commitment to extend devolution, something he hasn't mentioned for a long time, and was kicked firmly into the long grass by Theresa May.

"As I say, we will not be proceeding with a one size fits all template. One possibility is a directly elected mayor for individual counties but there are other possibilities. We could devolve power for a specific local purpose like a county or city coming together to improve local services like buses. So my offer to you – and I am talking to all those who see a role for yourselves in this local leadership- come to us, come to Neil O Brien or to me with your vision for how you will level up, back business, attract more good jobs and improve your local services."

As I've watched the government's front bench team lurch from one shambles to another I've constantly questioned whether there are actual grown-ups somewhere in the room. People who make decisions based on reason and good policy, rather than just winging it and bumbling from one day to the next. A couple of years ago I went to a few fringe meetings at Tory conference in Manchester and - OK, I may be clutching at straws here - Neil O'Brien MP came across as one of those decent, thoughtful, practical,  One Nation Tories that saw the merits of the extension of devolution. His current berth in the government is vague, he was a forceful counter to anti-lockdown lunatics on the Tory benches over the last year and now he's been asked to drive ideas for levelling up. He's either being set up for a fall, or his intellectual talents are being put to use to get stuff done. This, from Politico, is very good.

Whispers I heard from Whitehall were that the standoff with Andy Burnham last year spooked the government. He didn't get what he wanted, but Burnham achieved a status (King of the North) that gave him a moral authority few other leaders have achieved. To create more Kings and Queens in the regions is a gamble that they have other people to play off against one another is the cynical view. The other agenda, highlighted by Michael Heseltine last week, is systemic reform of local government, removing two-tier authorities forever.

Each region, each city, comes at it from their own historical and relational place. Greater Manchester kept many of the logical loose ties that survived the abolition of the County Council in 1986. A narrative persisted of a city-region that could absorb towns and districts and make them better. Though it sometimes fractures, there is a broad consent of the 10 that they are stronger together.

In the course of researching my thesis on Devolution and Democracy, I spoke to lots of people in other cities about their relationship with a Mayor. There was a reason Andy Burnham spent so much time doing media appearances and glad-handing around Greater Manchester during his first term. It's not just because he's a presentable and polished performer in his comfort zone, but without civic and external buy-in the convening power of a uniquely networked role as Mayor can't work. Delivery is never just about the legislated structures, but the ability to make change outside as a convenor of people and groups. Dan Jarvis can't yet click his fingers and pull together a coalition of willing businesses to tackle a compelling local challenge in South Yorkshire, more so for Tracy Brabin who has only just been elected in West Yorkshire. It's not just about building a case for holding up the begging bowl, but understanding where internal alliances within devolved city regions can come together to create improved outcomes and a shared strategy people believe in.

Politics is always a delicate balancing act, especially when dealing with a government as focused on self-preservation as this one. The next phase of Mayors will not be a rerun of the first act, but it has the potential to reshape decision making in this country for good.

Posted by Marpleleaf at 8:54 am