Lunch of the month - Cafe Marhaba 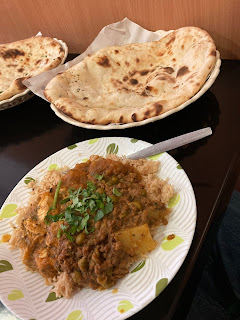 We're supposed to be back to some kind of normal, so this blog is resuming the tradition of picking a 'lunch of the month'. I'm not going to be testing the steaks at Hawksmoor, or trying to make a pitch to be some kind of foodie blogger, it's more of a thing about what you might grab in and around work, pitched at under a tenner.

The variety this time will be that I mainly work from home, so I might pop into Marple and other spots locally. For that reason, the new butty shop in Bredbury - Bread- Brie - is an early strong contender. Their steak canadienne with gravy and onions was sumptuous. I've also had decent bacon butties at both The Locks and Red Pepper in Marple.

I've got a few things going on in Stockport as well, and there's much to commend the Produce Hall, the market area and some other gems.

Then there's Tameside, where I need to get out and about. As a local radio personality and newspaper columnist I need to know my patch much better. So far, I haven't found one that can top Lily's in Ashton, which the recent Manchester Food and Drink Awards also acknowledged.

Being only a hop skip and a jump from Manchester means there are plenty of choices within easy reach, but it's a slightly different dynamic than when I started this a couple of years ago and I was permanently based near Oxford Road.

I've had a couple of trips into Manchester to try and drum up business and do a day's work, that have also involved food, and my eldest son Joe lives in the city centre. All have been pretty good, but one was outstanding. Gorilla's burger was as good as I remember it. I tried the Levenshulme Bakery shwarma and it was decent. Wing's in the Arndale Market is reliable, and a bit of a guilty pleasure.

But the winner was Cafe Marhaba in Back Piccadilly, an unlikely setting, but their Instagram page has tantalised me for 18 months. It has a deserved cult status amongst those who know of its clay oven, the delicate bread, the taste of texture of the curries. I have really missed it, so much so I couldn't settle on what to have so I went for the trusty rice and three, lamb, chicken and keema. Astonishing. Other places do dependable rice and three, but no-one comes close with bread like this. I had a garlic naan, my pal had a chilli one. Superb.

If you fancy joining me or suggesting somewhere - and I tagged a few potential lunch chums on the Twitter - then let's do this.

Posted by Marpleleaf at 4:42 pm