Radcliffe to Wembley - the latest twist 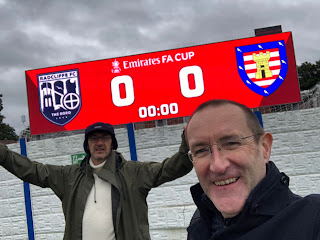 Thanks for having me, Radcliffe, it's been great getting to know you.
It was a bruising physical duel at Radcliffe today that saw Morpeth Town upset the odds with a 3-1. The damage was done in a first half performance that saw luck on their side as they snatched three goals that proved too big a margin for the hosts to overcome.
I can't put my finger on what Radcliffe lacked, the first goal felt like it was against the run of play and that they'd get one back quickly. The second was a scramble from a corner, and the third had them shell shocked at how easy Morpeth swept it in, but it takes nothing away from a gutsy defensive showing from the visitors from the North East, who consistently played out from the back with real confidence.
My friend Steven joined me for this stage on the journey and once again we were greeted at the gate by our mate Alan Townley, a Boro director, who is a popular and well-known local personality, known by name and reputation even amongst the young lads behind the goal who chanted his name at one point.
I'm now anxiously awaiting Monday's draw and hoping Morpeth's name is paired with somewhere new and interesting (and not too far away).
Posted by Marpleleaf at 5:21 pm