Lunch of the month for October 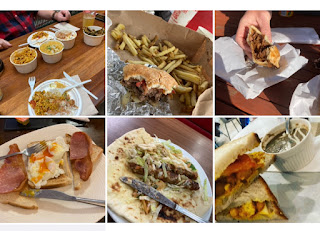 It's a very strong shortlist for lunch of the month for October.

I'll take you round, clockwise from the top left.

It was a flying visit for a few snacking pots at the new Oxford Street branch of the exceptional Bundobust, brightened by the company of Professor Andy Westwood who had just been on a panel at Tory conference and probably needed to come back down to earth. The okra fries I've had before, and are a must. The dahl was smooth and full of flavour. We probably could have tried a Dhosa and a rice dish, but this was really high quality.

Next up was another trip to an old dependable, the Ashton branch of Five Guys. I know it's expensive for a burger, but I think they are the best burgers you can get, bar none. I love the way they offer a customised burger. Me and Matt share a massive portion of fries, again, as good as any you can get elsewhere. Sadly, for the first time ever they got my order wrong, no mushrooms and onions. Still good, but one to keep an eye on, Five Guys.

Up to the Lakes next and these next two were just the job on walking days. One is a perfect egg on toast from the Black Bull in Coniston, the other is a thick juicy steak pie from the Old Cobbler's Cafe in Hawkshead. Both were sensational. Genuinely amazing food and just right for the day.

After last month's swoop by Cafe Marhaba with their twist on the rice and three (curries), my good friend Neil pointed out that the best ethnic cafe in that part of town was Kabana. His love is not misplaced. I have enjoyed many a delve into their menu, not least with Kevin Gopal, the editor of Big Issue in the North. I popped into Kabana after a meeting and was delighted to run into Jim from Planks Clothing, which is part of what makes Kabana so cool. I like the new interiors as well. The keema with salad on nan bread was exceptionally good, but I'm not being drawn on whether it's better than Maharba just yet because it's not really comparing like with like.

Finally, there will be worse places than Vertigo to spend an hour in the wind tunnel that is MediaCity, Salford Quays, especially listening to Rishi Sunak's budget as I did so. Lovely service, excellent wifi and a very good mushroom soup and cheese with piccalilli sandwich.

The winner, by an okra fry, is Bundobust.

Posted by Marpleleaf at 9:30 am