FA Cup odyssey - a twist in the tale 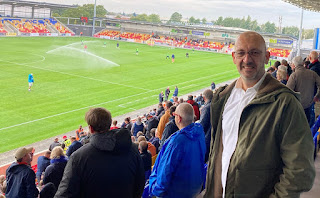 The FA Cup journey - or odyssey of oddities - has taken on a curious twist in the last few days. Having followed the happy scrappy grafters of Morpeth Town, the Highwaymen, from the mugging of Radcliffe, which earned them a trip to the slick and sophisticated new home of York City, I hadn't really contemplated the consequences of a draw. These are scheduled to happen on the Tuesday after the main event and have to be wrapped up on the night. Extra time and penalties if necessary.

Morpeth is a long way to travel at any time. If you drove, you'd still have your pedal on the metal forty minutes after you passed the Angel of the North. The last train back is at half ten, getting me home at half four, which is some going on a Tuesday night, with the prospect of still leaving before a potential penalty shoot-out. My new mates who I watched the second half with at York chided me at the conclusion to the game - a 1-1 draw - that I would now have to do it. Of course, I don't have to do anything, this is a casual challenge driven only by my own curiosity, nerdishness, and neediness for purpose.

When the draw was made on Sunday, however, things got interesting. The winner of the replay in Morpeth would be at home to either Kettering Town or Buxton, who would be hosting a replay just over half an hour down the A6 from home. This way I would get a sneak preview of the opponents in the next round on November the 6th, which I am totally committed to. Maybe the chance of penalties and giant-killing and drama was too alluring, but amazingly my wife Rachel opted to come with me. As our friend Patrick Loftus said on Twitter - "you are mad". Or maybe it's true love.

On Saturday it was a bit of a rush to get to York, and I sadly saw very little of one of my favourite British cities. The new stadium is situated well out of town but is easy to get to by shuttle bus. I laughed when the directions to the ticket office were to pass the cinema, cut through the leisure centre, and turn left at Starbucks. It's very modern, very unlike what I expected to see watching a home game involving a team in National League North, as was the crowd of 2,258.

I've had form watching York City in the FA Cup. In 1985 a trip with my mates from home to see Morecambe in the First Round proper at Bootham Crescent was the preferred option to a fight in Stockport with the National Front. I was committed to the cause, but I rather suspected the students I would have been with would get properly battered. It turns out the local Stockport hooligans turned on the Nazis and that I rather underestimated how game the Jewish Student contingent from Manchester were. The game ended 0-0 and the replay, shamefully, though conveniently for me, was at Maine Road.

I also saw York City's last ever game in the Football League, at Morecambe, in 2016, which I blogged about here. Things have been rough for them since, dropping down even further, but emerging with a nice new home. The only way will be up, but there were rumblings of discontent that the board should be sacked. I probably need to investigate, but it wasn't a director who flapped at a header in the 75th minute.

All told it was a feisty game, clash of styles, a game of two halves, end to end action and some late drama. Knowing what I noticed from Radcliffe, Morpeth are fighters. Despite being frankly played off the park in the first half, they came out in the second with no intention of rolling over. By the end, York's slick passing game was gone and they were hanging on and in relative disarray.

The football is the prime fascination, but I always seem to meet nice people too. I watched the second half with a stag do spin off pair from Norwich, who I caught taking pictures of a pie whilst sporting a niche French football training top. I also enjoyed chatting to Morpeth's chairman after the game, who was absolutely thrilled. 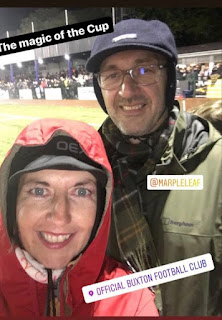 We only just made the kick off at Buxton due to traffic, having no cash, and then queing up to get in to see Buxton try and get to the First Round of the FA Cup for the first time since 1962. That wouldn't have been the most heinous error of the night though. I do prefer to do this jaunt on public transport, but we were slightly concerned that the last train from Buxton to Disley leaves at 22:55. Extra Time, penalties and a celebration would cut it a bit fine. As it turned out, so would the ensuing chaos caused by the planned floodlight shutdown on the stroke of 10pm, which no-one thought to override, stretching the evening's entertainment out a bit.

Buxton went 1-0 down to a second half goal by Kettering's unit of a centre forward, Kyle Perry. It's sensible they have an artificial pitch in the Peak District, but although the ball can roll freely, the swirling wind was a major factor for both sides. Buxton are a good team though and their talisman is Diego De Girolamo, who has played professionally at a high level, and probably could do so again. He struck two good chances that fell to him in Extra Time and could have had more, as the Northern Premier League side humbled their National League North visitors.

I often wonder when I watch non-league players what fine margins led them here, rather than the riches of the Premier League, or even the more modest achievements of a career for a club in the Championship. De Girolamo seems to have had bad luck, signing for clubs in crisis. I imagine he's enjoying his football at this level now, more than he did as a Bristol City reserve player.

As for the stadiums, York Community Stadium is a modern, neat and well-built facility with a good view and a good surface. Should York ever need to, it could be extended. It's the 163rd ground I've paid to watch football on.

Buxton's Silverlands stadium (the 164th) is tidy, with a raised viewing position at the side, where I like to stand, ideally, and a tall compact stand. There were 1,017 there to see history being made and most seemed to have queued for a pie and a cup of tea at some point in the evening.

Meanwhile, up in Morpeth, York did a professional job on them and cruised to a 3-1 win. So I'm back to York on the 6th of November and a little bit of history being made between two teams from lovely places.

Posted by Marpleleaf at 5:52 pm