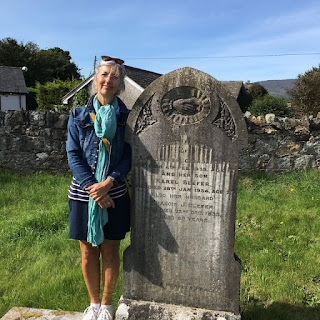 We pack a lot into our little holidays, and we always seem to learn a thing or two.
Full Irish breakfast to start a busy day, comes without baked beans, and soda bread is better than two slices of holy ghost.
We had a lovely chat to Pat Casey, the manager of the Glendalough Hotel, who enjoyed learning about our visit to the former seat of one of his predecessors, Francis Slefer, Rachel's great grandfather. He showed us around the documents and the hotel diary, the reason why the name lost its Royal in the 1980s.
Pat also pointed us along the way to the ruins of Derralossary Church, a Protestant chapel, where Francis and his wife Agnes and son Karel are buried. The grave is right next to the family resting place of Erskine Childers, the only President of Ireland to die in office in 1974, and his author and rebel son who wrote The Riddle of the Sands, and was killed by the Black and Tans in the Civil War.
We took in St Kevin’s Church and read of the story of a blackbird nesting in the outstretched hand of the imprisoned Kevin of Glendalough, immortalised in a Seamus Heaney poem. It's self-sacrifice, doing untold good for others, no matter the personal cost, which on the occasion of the special birthday for the most generous soul I know is remarkably appropriate.
Maybe because I was raised tantalising close to the sea I have a thing for seaside towns, closed down, forgotten, or revived. Bray looks like the latter. Lovely, tidy Bray. The seaside town that refused to shut down. Inevitably, ill-equipped and under-estimating, we cracked on and walked a sharp route to Bray Head Cross on the headland above the town. Maybe I missed something dark, a few streets back from the shore, but I loved Bray and I think it's the town Morecambe could be.
We watched the sunset on a beautiful trip as the sky lit up red over Dublin Airport.
Happy birthday,  Rachel. I don't think I could love you any more, but I'll keep trying. Keep stretching out that hand.
Posted by Marpleleaf at 10:05 pm