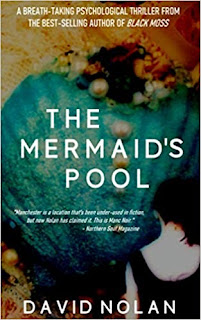 It dawned on me half way through The Mermaid's Pool that I was far more familiar with the universe it depicted than I first appreciated. It takes a rare skill as a storyteller to do this. Not only has David Nolan carefully and painstakingly crafted characters and a realistic backdrop, he's also planted seeds in your imagination in his first novel, Black Moss, set nearby, but with a seemingly different storyline, era and location. There are overlapping characters, but not in an overt way, not as a centrepoint, but as a landscape. Obviously part of the reason I liked the book as much as I did is because it's got bits in it that I know about and am a little bit obsessive: British fascism, Kinder Scout, rave music and local politics. So often I read books about worlds I know something of and when a vague detail isn't quite right then it ruins it for me. Again, it's a skill of a journalist and writer of David Nolan's quality that he never slips up. I trust then that the depictions of police procedure and cancer care are as well researched. All that said, the real pinnacle of Mermaid's Pool is the story. It is pacy, shocking, violent, but also very well structured. You think you've worked out plot twists, but there's always a surprise in store. Highly recommended and I can't wait for the third in this Manc Noir trilogy, The Ballad of Hanging Lees.