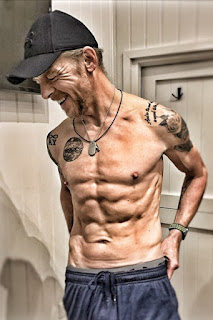 I was a bit disturbed when I first saw this picture of actor Simon Pegg uploaded to Instagram by his personal trainer. I too get unsettled by pics our PTs stick on the Facebook group, mostly because I seem to look like I've got a wok under my top and have sticks for legs.

There has been all sorts of commentary and judgement on Simon's transformation, but on further reading of his story to fitness over the last few years I found the journey a familiar one until this point he reached in March. So I simply don't have the time, the money or the capacity to set goals as ambitious as his - rapid weight loss in order to look scrawny for a part in a film.

But I have reached a point where I'm struggling with goal setting. When my gym moves to a new site next month it will mark about two years since I started training. I wrote about it here, so it will be a useful juncture to weigh up where we are and what I do next.

On the plus side I'm the fittest I've ever been at 53 years of age. I suffer no shame in that. Getting into the habit of going to the gym about three times a week was a big step and I've stuck at that. It's also been 7 and a half years since I drank alcohol. I haven't weighed myself in ages, but if I say it now, it's there for the record, I'm just over 90 kilos (14 stone). I'm terrible with figures, but I think I've been almost two stone heavier. Putting that number into an NHS website, with my height and age, it flashes up - "you should cut down on your pork life mate, get some exercise". My Doctor isn't concerned.

There's the nub of it, the numbers don't tell me anything. How I feel does. I don't get as down as I used to. I'm not going into all of that, but there's a massive link between the endorphin rush of a training session and how well I feel mentally, and then how I sleep, and all these things are linked.

So what should I aim for - more weight loss? Dieting? I think I eat quite well. I don't want to give up a chippy tea and the odd pie. I like to think I've earned it.

I'm not going to get in a boxing ring and I don't want to run a marathon. My football days are over. So what's it for?

But how about going for a reduction on body fat and getting ripped like Simon? Can I? Should I? Then what? How much metal should I be shifting. Every single time I go, I record what I've done in my book, and right now I couldn't tell you accurately what my personal best is for deadlifting, bench pressing or squats. Even if I did, I wouldn't put it in a blog.

There was something the writer Tony Parsons says in his GQ column this month, "the work is never done." You don't stop when you reach these goals, or slide back, you carry on, until the next session and the one after that. Packing your bag, making sure the kit ready. It was the last of his ten commandments of the gym, my absolute favourite being "train with someone" which has been the biggest single joy of being a member of Body Box Mcr. It's the other people, my training partners, the expert personal trainers. But maybe that's all it is, keeping at it, loving it, staying happy with it, seeing others hit their goals, being part of that, committing to something greater than yourself for the benefit of others. Maybe that's it?

Posted by Michael Taylor at 9:42 pm