Who benefits from the latest Labour horror show? 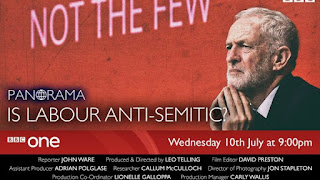 Who benefits from Labour's latest row? Or to put it another way, does this grim spectacle, actually suit the far left? Of course it does. By staunchly defending the mistakes of the past, the clearly dysfunctional response to antisemitism, the battle lines have been drawn. The mob has been raised.

I think the leadership have made a calculation that there is no more damage to limit on the issue of antisemitism. It has become mainstream and priced in to Labour's brand.

Straight after the European election results it was clear that the left were itching for Tom Watson to make a move and launch a leadership challenge. It was the one thing that a wounded beast needed to revive itself. It worked in 2016, when the Owen Smith challenge played right into their hands. A summer of pro-Corbyn rallies and roadshows would have been enough to fire up the base again.

Consider too the timing of the letters sent to MPs around their intention to stand in a General Election. The leadership must curse the missed opportunity of 2017 to sweep the stables and recreate the Parliamentary Labour Party in their image. By putting pressure on the present remaining 247 Labour MPs to quickly confirm their intentions was meant to put the squeeze on a few to confirm they were going to quit and couldn't stomach a challenge. On balance, I'd suggest it hasn't worked. Some have refused to say, others have said they will be standing again, but in truth they know they won't. Others know they now face trigger ballots and likely deselection.

The contrasting Twitter statements in response to the Panorama programme presents itself to the membership as a useful guide on which side MPs sit. A little less Pat McFadden, Louise Ellman and Wes Streeting, and a little more in the style of the arch loyalists - Dan Carden, Laura Pidcock and Dawn Butler.

I have only a passing interest in a couple of selection contests and it's clear that well-qualified and highly capable candidates from the wrong part of the party are being pushed out in favour of woeful but ultra loyal candidates supported by Unite and Momentum. And this is despite 'dressing to the left' in their recent statements and campaign rhetoric. Sitting MPs, even serving shadow cabinet members, will face vicious show trials and demands for statements of loyalty to the cult.

Part of me knows the left aren't as clever or as strong as they like to think. But it is their party now, and all Labour MPs (and members) have to wake up to that, however painful.

Anna Turley MP nails it when says: “If we cannot deal with internal problems like this, we cannot ask the public to put us into Downing Street.”

But as Ian Austin MP, who has had the courage to say 'enough is enough' and actually mean it, has said, they will. They all will: "They are going to have to decide whether they can really appear on television or campaign in an election to tell people that Corbyn should be Prime Minister. That is what it will come down to. There will be no ducking this question when an election approaches. It is no longer enough to issue a few angry tweets or to tell people like me privately that they understand why we left the Labour Party or that they disagree with Corbyn and the people around him."

To the absolute avoidance of any doubt whatsoever, the Panorama programme (and the unruly reaction to it) was a searing indictment of a party utterly unfit to govern. If this is how they mobilise the mob while in opposition, think how ugly it will get when they have the levers of the state at their disposal.
Posted by Michael Taylor at 1:39 pm