Have an awayday, Glasgow Rangers away 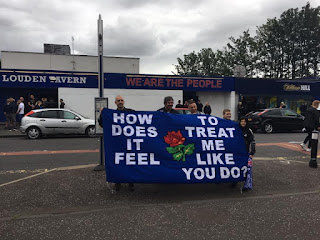 I’m often reminded on a football related trip to a city that I barely touch the surface, but that those you do tend to be a bit sticky.

We were early for our agreed rendezvous in a location near the station, so ate first. Given we were meeting my mate’s son, wife and baby grandson, it wasn’t going to be a ‘Spoons or a spit and sawdust bar. But we ended up spending only the briefest of time in Platform under the arches, with its artisan craft stalls and interesting ethnic street food.

I like Glasgow, I’ve been for work a few times, and was best man at John and Rachel’s wedding 21 glorious years ago, all full of happy memories. The grand and imposing industrial centre, and the embrace of the Clyde is redolent of Newcastle, and the people have an easy charm.

The experience of taking the miniature Subway to Ibrox and the stroll around the ground before the game were probably bereft of the everyday edge you’d get from a Rangers fixture in the season. Certainly I couldn’t imagine getting away with unfurling a flag outside the Louden Tavern would be acceptable to fans of Aberdeen or Hibs.

Then again, much as it fed the occasion to be amongst 1600 travelling Rovers fans, most of whom seemed to have been on our four carriage Trans Pennine Express train that morning, it really wasn’t much more than a glorified training session. Rangers were the better team in the first half and Defoe showed class in how he put his goal away. All my frustrations with several of our regulars picked up where they left off last season. Happily too so did my ever so slightly irrational love of Lewis Travis. The second half featured more of our exciting crop of young players and I saw more to like about the skilful and industrious John Buckley. Ben Brereton and Richie Smallwood have wilder hairstyles, the latter I hope because he’s on a journey to becoming the Redcar Pirlo, effortless style, a “brio”, “sprezzatura”, a different sort of axeman.

By the way, I’m over the horrid away kit. It is what it is.

We couldn’t not go today. We also couldn’t not go into the heart of darkness that is the Louden Tavern for a quick drink after the game. It was everything I suspected and worse, I hadn’t realised that this scene in T2 was a documentary. But we were greeted as friends and comrades, a secret handshake away from joining in the loud renditions of battle songs. When the early chimes of Matchstalk Men piped up I thought it was a nice touch to embrace their Lancastrian visitors. Nah! Old tune, different lyrics and papist bashing.

Fulham away is next, and I do love a London trip. There won’t be time for a stop over at the Design Museum for the Kubrick exhibition, but it won’t detract from a pleasant pre-match refreshments around Putney Bridge, nor will it feel like a missed opportunity. That said, to keep things consistent, we squeezed in a personal Glasgow tradition; a curry.

And of course one of the reasons for these trips is it’s a taster for a return. You couldn’t say that about Scunthorpe or Northampton.
Posted by Michael Taylor at 7:52 pm