Mark Hollis - one half won't do 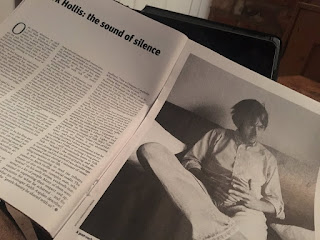 The death of Mark Hollis in February was a real shock to the system. Not because I knew him, or ever met him, nor that I was a lifelong devotee of his music. It was more about the outpouring of appreciation for a very special talent, and the manner of how he lived the rest of his life, seemingly in mysterious isolation. The appreciation of his work being gifted, rather than grafted.

Musicians approach fame and notoriety in different ways. Tragically, it appears to have contributed to the end of Ian Curtis, lionised and speculated on forever more for the tragedy and pain and the loss of all that creative potential. The mystery of Richie Edwards haunts all fans of the Manics, me included, tinged as well with deeper and more complex issues around anxiety.

The arch version of Mark Hollis' musical history is that the early stuff was a bit 'Duran Duran lite', but he matured, became a genius and then vanished. The tributes that flowed after his death were fulsome and touching. The best of them all was this here from Jason Cowley in the New Statesman, accompanied by a beautiful photograph by Kevin Cummins (above). In fact, I said at the time that I had sat down at the end of that week to write something about the amazing music, strange life and sad death of Mark Hollis, but Jason Cowley had saved me the bother.

But I actually loved the big sound of those early New Romantic anthems. It's My Life has been a favourite of that era ever since the very first time I heard it and assumed it was Roxy Music. Listening to the lyrics now too, piecing together what we know of Mark Hollis and his life, the ache of yearning, the trust of a pledge of commitment to a relationship seems all the more poignant - "one half won't do".

I was talking to local switched-on cultural genius Neil Summers about him, including the embarrassingly similar memories of dancing to the pumping bassline and soaring optimism of Life's What You Make It. Neil had an idea to do a BBC4 documentary about the lost talent of Mark Hollis. He won't be the last, I'll bet.

But it was the exhalations of Elbow's Guy Garvey for Spirit of Eden that I suspect opened a doorway of discovery for many. I know it did for me. It is a work of extraordinary tenderness and beauty, a blend of styles far away from the bass and keyboards of earlier anthems, a fusion of prog rock, jazz and a touch of English folk. Brittle at times, but also majestic and life affirming. It's one of those pieces of music that you seem to find something new about it each time you listen. That the record company hated it when it was dropped on them in 1988 says as much about the music business in that era than it does about such a talent. That said, it was probably a clash that could have been foretold. His awkward interviews, his painfully bashful and very rare live performances, and his reluctance to take seriously the requirements to make a pop video were all indicators of someone not willing to play a game he probably thought to be ridiculous.

You can't listen to any of Elbow's music without sensing the presence of Spirit of Eden all around it, something Guy acknowledges on a very special tribute to the record on BBC 6 Music, broadcast way before Mark Hollis departed, but repeated all too briefly in the aftermath of his death.  Please put it back on BBC Sounds.

Snippets have emerged of the life Mark Hollis was living in the 20 years he was away from the music business, but I don't feel I want to know any more than the observations Jason Cowley shares:

"There was nothing pretentious about Hollis in person: he was relatively inarticulate as a conversationalist but of course found himself supremely articulate in the language of music. Liberated from financial worry by the success of the early Talk Talk albums, notably in Italy and Germany, Hollis lived well and seemed to be content in his roles as father and husband."

To seek more would be like a snooping voyeur, pressing our noses up against the window of something we didn't know what we were looking at. What we can know, and should celebrate, is that he had a musical gift. It's but one half, if that, of a life, of a whole person. The rest is mere speculation about someone who gave very little away, yet bequeathed so much.
Posted by Michael Taylor at 5:10 pm