Where were you when we were getting high? 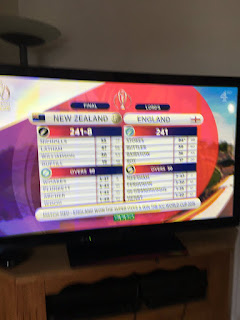 So it came down to a champagne super over. I thought of it - maybe because, you know, once an editor, always an editor. But it was as dramatic an ending as it was able to be. Snatching a hope of victory from the jaws of slow inevitable defeat.

But you can read about the twists and turns and the heroes of the Cricket World Cup elsewhere and in abundance. I can only add something of the emotion of it. In our living room, where we've seen England football teams lose semi-finals, quarter finals and send us to bed in sadness. We watched the 2012 Olympics in our holiday cottage in the Lakes, and how surreal and triumphant all of that now feels.

Louis said in the final over, please, just once, let me see in my lifetime an English team win a major tournament.

Had I been glued to the TV all day, gripped by it? No, we've been gardening and dipping in and out. I can't claim to be that big a cricket fan, but Louis was providing yelps and groans to keep us posted.

I just sort of expected disappointment. It's become part of our psyche. To be voyeurs at someone else's sporting moment of absolute triumph.

In the end though it was essential viewing. I was drawn to the collective moment and fully expected disaster. The heroic, so-close but yet so far, drama. We had to watch it together, bonded in that finale.

Thank you.
Posted by Michael Taylor at 9:32 pm