The new Blackburn Rovers away kit is just so dreadful 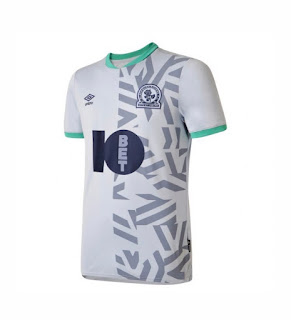 It was the worst kit I've ever seen. A dreadful positioning of a sponsors logo, no respect for the tradition of the club and the ultimate in crass.

Fortunately the new Huddersfield kit was a stunt, a spoof by a betting company.

Ours is worse. I literally hate it. Now I don't buy replica football shirts. Those I do own are in a frame and I only previously bought the odd polyester nightmare for playing 5-a-side in.

So I get that I'm not the target market for "away kits as leisure wear". For me, football kits are for playing football in.

I'm also a bit old fashioned when I think of my own team's kit. We're blue and white halves. We're Blackburn Rovers. Blue on the left and white on the right, reversed on the back. And it's a royal blue. Not sky blue, or a tinge of turquoise. Blue.

Away kits are a different terrain. But for me it's either red and black, or yellow and blue. Anything else is tinkering with tradition. I didn't like white, there's no point. I didn't care for burnt orange either. Apparently the all black one was the choice of the players at the time they were all wealthy enough to be driving big black Bentleys and Rollers. It's also the last kit I own, because Mark and Juliet Cort got me one with Taylor 40 on for my significant birthday. Thanks guys, I still wear it to the gym occasionally, that or my Lancaster City away kit which was also a present.

But this kit is an abomination. No link to tradition, no purpose or story behind it. Not that it has to. I noticed with some disdain that Manchester City have launched an away kit with a nod towards the Hacienda's yellow and black chevrons. The launch stage was evocative of New Order's Music Complete album design. I'm sorry, but I hate that too. And what the hell is a launch of a kit all about? It's confected history, and smacks of trying too hard. And at a time when the city needs to move on. What's wrong with people?

I tremble at the thought of what was said in the meetings that created this atrocity. Did someone once say of a kit, "It'll look good with jeans"? Who decided? Was it Umbro? Or the betting company sponsor? And will they be adding vaping companies and law firms to the shirt again this season? looking in the end like a Formula One driver's outfit.

At a time when terrace culture and styling is getting more sassy and culturally aware, this is the anti culture. A Brexit shirt in defiance of all that is modern and aesthetic. This just looks like someone's run over it with tractor tyres. I can't see any redeeming feature of it. Even the badge is mono.

To top off a truly dreadful decision, the first outing of this hideous curse of a shirt is going to be at Glasgow Rangers on Sunday. A green collared shirt and socks. At Rangers. As if taking a team captained and managed by ex-Celtic men wasn't stupid enough, we're wearing green. Maybe that's unfair to our sophisticated metropolitan opponents. I shouldn't judge. Just step up and play.

I'm looking forward to the day. We're going to enjoy it, come what may. But more often than not I find myself shaking my head at the decisions of the board at our football club. But what do I know? I'm just a fan.

Posted by Michael Taylor at 8:29 pm