The men who went to the moon 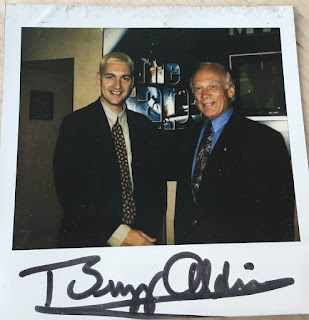 There is something so magnetic about the original astronauts. As kids we followed all the space missions avidly. I was only 3 when the first mission to put a man on the moon was completed 50 years ago today, but we all wanted to know much more about it. Somehow it seemed to symbolise boundless optimism in a world of conflict. I remember very well the Apollo-Soyuz mission with the Soviet Union to link up in space.

It was a great privilege to meet Buzz Aldrin in 1995 at the MIPCOM television market in Cannes. He'd been flown in by MTM, a Hollywood studio, to promote a new series called The Cape, which he wasn't even in, but was about NASA.

There wasn't a great deal he imparted, in truth. He was happy to pose for pictures and say how pleased he was to be there. I wish I'd made more of the opportunity. It's difficult to find the words other than 'thank you' for being such an inspiration. He's had an eventful life, not always a happy one, struggling with drink and depression. But even at 89 he remains a fascinating, lucid and thoughtful man as this interview with National Geographic shows. He gets called the second man to walk on the moon. I think of him of the first man to take Communion on the moon. There's an exhibition at Lichfield Cathedral celebrating this.

In 2003 I also met Neil Armstrong. He was the keynote speaker at the North West Business Convention at Tatton Park alongside Peter Mandelson and Sven Goran Ericksson, amongst others. The event lost money and didn't quite live up to its billing. I suspect that Neil Armstrong had two prices for public speaking. One for $20k to talk about the moon landings, and one for $10k to give a lecture on the history of flight. The organisers clearly plumped for the second and the delegates were left disappointed.

Anyway, I know what you're all thinking. What's with the hair? It wasn't through the shock of meeting Buzz, but it did seem like a good idea at the time.
Posted by Michael Taylor at 8:26 pm