No justice, no peace 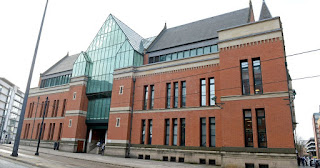 There's a great big gnawing hole in the middle of our society that many of us will never experience. It's one that all of us feel ferociously passionate about and have very little faith in. While the NHS is visible, we demand better and better of it, and we praise it when it works for us, for all its faults. And we will happily wear badges saying how much we love it.

But the criminal justice system has to be the worst public service of them all.

Let me caveat this piece with something personal. Today we have secured closure for something that has rocked our world for the last 21 months. But happy as I am about what has happened today, finally, my eyes have truly been opened over that time. I'm also going to leave out any detail about what we saw in court and that's partly the point.

The system doesn't work for victims of crime, it doesn't work for offenders, it frustrates the police, it is under-resourced, it operates in silos, there is a spectacular lack of trust between those silos, the flow of information and the protection of data is fragile. Despite being largely uncorrupted, compared to other broken systems in other countries, it is still held in contempt.

All public services have an element of being run for the benefit of the people that work in them, even the beloved NHS sometimes. But I've never witnessed 'computer says no' quite like it.

I'm aware this runs the danger of me just spewing out my anecdotes, but there is a large scale debate going on around the system that seems to have identified one of the biggest barriers to justice reform, the lack of transparency. There are two issues as I see it.

One, in a world where information and data has never been more visible, or more freely available, in the justice world it is largely hidden, often restricted and subject to complex rules. If you know how, much of that data - court records and the like - exists in what we loosely and lazily call the public domain. The restrictions around its management and distribution presents an opportunity for better public services. I'm going to go out on a limb here and say the tax system has got better in that regard.

Secondly, if it is accountability for the criminal justice system that lies at the very heart of its purpose - public consent - then tragically it has been outsourced to a tightly regulated media industry that to quote a technical term, is on its arse. Court reporters may have once provided a valuable public service, but frankly, in the exceptional high visibility cases, the reporting of crime is either non-existent, or distributed by a police press release. Why can't court transcripts, timetables, progress of cases and criminal records be there digitally for the public to see?

Amidst all of the urgent reform agendas going on in British society, the one to reshape justice has gone the same way as all the others, smothered by Brexit, or dressed up as reform when it's just a crude cost cutting device. There are some valiant efforts to push a debate on this, which will become ever more necessary.

A new court and tribunal service has opened this week in Manchester. We have to be hopeful that works.

Finally, I just want to say I've seen the very best of the police and the judiciary in action today. But they are poorly served, hampered and tied up in knots at times. Digitisation provides the justice world with the opportunity not just for justice to be done, but for it to be seen to be done.
Posted by Michael Taylor at 9:32 pm

I hope despite all this there is some closure from the process Michael, but I fear there may not be. My experiences of the court system, as a witness to a violent crime and as a juror, have tallied very closely with your account. The system isn't close to being fit for purpose. To describe it as shambolic wouldn't be unfair, despite the best efforts of the people in it.

We've said all along that this horrible experience and all our efforts to resolve it, has to mean something. We still have a complaint outstanding against two police officers for the way they behaved.

My insights into the care system, dysfunctional families, the generosity and strangers and the dynamics of gangs have really shocked me. Angry as I was, I felt real pity and great sadness too.

There's an absolute scandal at the heart of this that hasn't come out yet.

We have been right royal professional pains in the arse. We have irritated the police, the CPS and the PCC. But we have never, ever, ever stopped fighting. We were close to giving up in November last year when we first spoke up publicly. But the support and other subsequent events drove us on.

And yet this is where it ended up. Is that right? That between us you require the levels of support, soft power and raw determination to solve a crime?