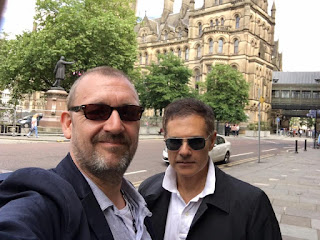 Due to the wonders of technology, but also due to sheer force of will and brotherly love I still manage to maintain a friendship that spans continents and dates back decades.

This is a series that celebrates friendship and tells a story about where that came from. And today's instalment is my mate Adil Bux.

I first met Adil back in 1988 in Perth, Western Australia, when he was a DJ and club promoter. In a crazy scene of bohemian characters, chancers and party animals I was drawn to this cerebral teetotal Muslim who shared a love of music and the wider hinterland. It was sort of my job to seek out characters, as a journalist, and his as a promoter and DJ to understand and discuss the wider music trends which I was mildly obsessed with at the time.

One of the things we did together was co-hosting a music show on 6UVS FM radio, where we'd generally talk, play records and interview pop stars. One was Kevin Saunderson from Inner City, who was massive at the time with his track Good Life. Hearing the opening bars of that track even now takes me back to the edgy highs of Limbo on a Saturday night.

Although we hooked up in London a couple of times when he was passing through, we somehow lost touch when he moved here in the late 90s and into the new millenium. There's a profile on him, here, in the West Australian, which covers most of his colourful life, including being a finalist in the EY Entrepreneur of the Year Awards in 2012.

The wonders of the internet brought us back together and with it two pieces of news - one that he was married to another old Perth friend of mine, Andrea Horwood, who was one of the first people to really show belief in me and who's determination and drive I have always admired. The other was that my old flat mate Roy Jopson had sadly died, a real life force who will always remain in our hearts, much greater than the horrible disease that killed him.

Now he has occasion to come through London a lot with his new business Nuut.com, we've made it a promise to get together as often as we can, as well as speaking on the phone and by all other means necessary. Sadly too, Andrea and he are no longer together. In 2017 I had a perfectly splendid day showing him around Manchester. We had lunch in Albert Square, and as it was in the days following the horrific attack on our young people at the Arena, respects were paid at Victoria station and in the flower bed of St Anne's Square. It was a symbol of all we shared that he knew so much of the heritage of the city, the music, but also politics and the twists and turns of our lives. Bizarrely, we topped it all off with a chance meeting with Graham Stringer MP.

Yesterday, we met up again and had a splendid lunch at Soho House White City, and we could have talked all day, even though him and his colleague couldn't always understand my accent. We talked about all sorts and laughed about even more. It's what friends are for. Safe trip home mate.
Posted by Michael Taylor at 4:50 pm

RTR FM 'rhythm method' show was a must back in its day, I heard all the DJs Ken Weyden / Adil Bux / Roy Jopson / and others inspiring music to go and dance to in the clubs around Perth.
Red Parrot / Network / Limbos / Buzz Bar?

Great little article, sad news back in the day when we lost Roy !!!

Thanks mate. Roy was a legend wasn't he? I'm sorry to say we lost Ken as well. A really kind gentle man and really dedicated to his music.