Yes, I'm still for change - our politics requires it 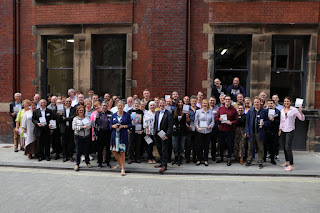 I can’t foresee any circumstances that don’t lead to a General Election in the autumn. The most likely path to that is a no-confidence vote to prevent no deal Brexit. The next most likely is an emboldened Boris Johnson doing so proactively in order to demand a mandate from the public for his deal Brexit, probably a slightly different version of the same one he resigned over when it was Theresa May’s Brexit. For any of that to give Johnson a hope of resetting the system is a deal with Nigel Farage and the targeted hounding of the remaining grown-ups in the Conservative Party.

Labour knows what it needs to do. Get rid of Corbyn. In a stroke it removes the single biggest obstacle to making a case to the British people for a new approach to public services, investment in infrastructure and international leadership. It doesn’t necessarily follow that the membership will elect someone capable of it, but it is clear that the paralysis has to end. I found myself listening to John McDonnell in a Times Red Box interview talking about his economic strategy. I think it’s wrong, wreckless and undeliverable, but at least it’s coherent. But when he got on to talking through the politics of it, the Labour positions and contortions, the defence of anti-semitism and the lame response to it. All of it was just so utterly unattractive. A real horror show.

So where does that leave me? As a wrap up from the EU election campaign, I heard murmurings that there was a move by some of the Change MPs to dissolve the whole enterprise. I got together with some of my fellow candidates from here, and from all the other regions, and we managed to persuade most of the candidates to sign a letter to Chris Leslie, as the campaign lead, to say don’t do anything hasty. We argued that we should at least try and keep the best of this campaign, namely the candidates and the activists we fell into this with, and see what we have to contribute. The end result of that was on Saturday when we had a get together here in Manchester.

Anna Soubry summed it up well when she said we have the right analysis and the right ideas. But it’s going to be hard in the future to build from where we are.

So I came away inspired but daunted. I’m more convinced than ever of the need for a movement of the sensible centre ground of politics. As my friend Andrea Cooper said: 'we’re the people who did something.' As were those MPs who said ‘enough’.  I can take the sneers, I can bat off the insults, because I’m convinced I’ve at least tried to do something positive. An opportunity awaits.
Posted by Michael Taylor at 9:51 pm