The Golden Age of Podcasting - a bit of a top 10 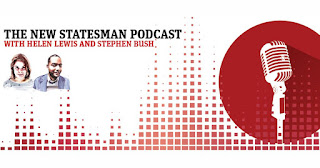 I've been an avid consumer of podcasts for the best part of a decade. For a while, most of the best ones were podcast versions of BBC programmes. It's true that my regular downloads do have plenty of them - including The Bottom Line - Evan Davis' very warm hearted business discussions - and Desert Island Discs, where I think Laura Leverne has been a great successor to Kirsty Young and always manages to reveal fascinating nuggets about the castaways.

But we now seem to be entering some kind of golden age. Major media groups are getting better at these, but for me the gems are elsewhere. So here are my top 10 podcasts - not produced by BBC, radio companies or national newspapers, in no particular order. I won't do the links, you know what to do.

Delving into Malcolm Gladwell's Revisionist History is such a great journey to go on, and right now we're exploring Jesuit thought and the casuistic method - though I must confess to getting really irritated by the adverts, especially when Malcolm voices them. Maybe I'm old fashioned, but you have to be able to spot the difference between advertising and editorial.

Unherd - Giles Fraser's Confessions - each one has been sublime. Even the one with Claire Fox.

CapX is a bit to the right of me, but I enjoy their takes on business and politics. The interview with historian Anne Applabaum was superb on Putin's Russia.

Progress - Alison McGovern has a remarkable brain - a real ability to see the bigger picture.

New Statesman - if there's a better reader of the political day-to-day than Stephen Bush I've missed them, his double act with Helen Lewis has sadly ended with her move to The Atlantic, but happily Anoosh Chakelian is getting into her stride impressively.

Polarised from the RSA - Matthew Taylor and Ian Leslie never disappoint. Their basic premise is to look again and how society is getting more divided and find ways through that. The episode with Elizabeth Oldfield from Theos think tank is a good starter.

Political Party with Matt Forde - making politics fun, but also ready to jab when needed. His interviews manage to get real insights and stories from his guests.

Intelligence Squared do some fabulous recordings of their live debates, but their one offs are courageous and compelling too. Rose McGowan on MeToo and finding a voice was unsettling but an urgent message on gender power.

I've been a contributor to two which in any other circumstances I'd be an avid listener regardless. Vaughn Allen's Cottonmouth Manchester really captures the best of Manchester. It's been a real honour to work with Eve Holt to run the rule over local issues around our city.

BRFCS - I can't believe how good Ian Herbert is as a radio producer. An absolute natural. The episode that Linz Lewis and Jenn Bellamy did a women's takeover was a pearler.

Posted by Marpleleaf at 5:06 pm