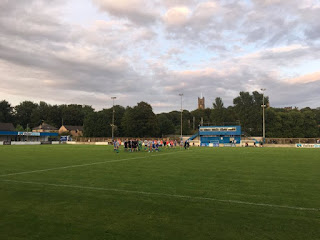 I had my football identity consciousness raising tonight. I sat with my Dad in the exact same place we sat in nearly 50 years ago at Giant Axe, home of Lancaster City, my local team where I grew up, and the first place he took me to for a football match, Lancaster City v Barrow, 1973.

Tonight the Dolly Blues played Blackburn Rovers Under 23s, which was why it was the first time I'd been back on the Axe in a long while. Also with us in the stand was Kevin Bradley, who took me to Ewood Park in 1977 and effectively recruited me to the Rovers cause, and two of my old mates from back in the day Paul Swinnerton and Dave Tinkler, both Blackpool fans and partners on several outriding days out with them in the 1980s. Tinks is now also my brother-in-law.

It's been said that your team finds you, rather than you hunting for the right team. Because my Dad wasn't a native Lancastrian, I didn't inherit a team connection. So all that convergence of circumstances has ended up in that place tonight, watching my club's reserve team against the home town club.

Even though I probably couldn't find my way out of Blackburn without a map, Rovers is unquestionably and defiantly my team. It's more than a colour or a badge, but an identity. For all the foibles, it sort of defines who I am more than anything else. I used to drift between all kinds of teams when I was younger, never quite sticking, never quite belonging. But I felt at home with Rovers, probably because I wanted to be part of that gang, initially, but it outlasted the patience the older lads had for me hanging around with them.

I've probably been to Giant Axe more than any other ground than Ewood Park. I even played on that pitch (or half of it) in the annual Easter Field schools football tournament when we got to the semi-final in 1977. It's in such a gorgeous setting, with the castle and the station overlooking it as you watch from the main stand.

But it's not my team. There's something about non-league football that doesn't quite do it for me. Tinks pointed out that one of the Lancaster players was off the Marsh, the estate right next to Giant Axe. But he was the only local one that he knew of. Town clubs should have a few faces at their core, back in the day it was Vaughan Williams, more recently the much mourned Neil Marshall. I hope they find a few more to walk in their shoes.

Rovers has been the constant in a life of movement and flux. And what a journey, what a time to be alive. So, here ends a month of blogging every day. I'll reflect on how it's gone by the end of the week, then we're on holiday,